Serbian Foreign Minister Ivica Dacic has assessed that the US administration "openly supports a compromise solution to the Kosovo problem." 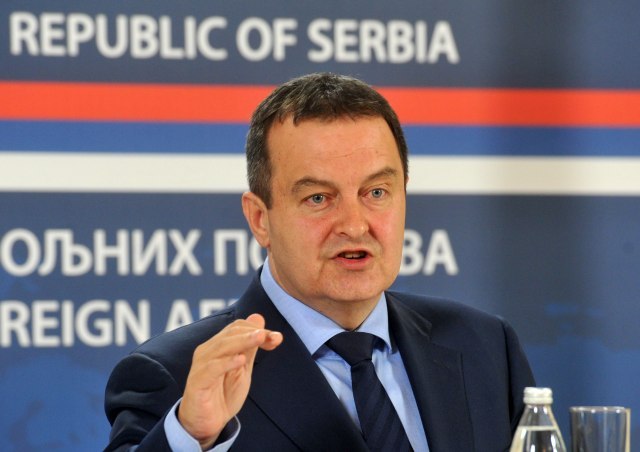 Speaking in Washington after meetings with senior US officials, Dacic said that Serbia should "seize the moment."

"Now the (US) administration is ready to, at least, talk equally about our proposals for resolving the biggest probles in the region, which is definitely a lasting solution to the problem of Kosovo and Metohija. Today, there is open support for a compromise solution that is very positive and stimulating for Serbi , as an opportunity to reach a solution in the interests of all parties," Beta agency quoted Dacic as saying, citing a press release issued by the Ministry of Foreign Affairs on Friday.

The head of the Serbian diplomacy was on a two-day visit to the United States where he attended a ministerial conference dedicated to religious freedoms and a ceremony to mark the 100th anniversary of the raising of the Serbian flag at the White House - US President Woodrow Wilson's gesture meant to honor Serbia's sacrifice in the First World War.

Dacic said today that the new US administration of President Donald Trump created a "more favorable atmosphere" for expressing Serbia's stances and that there is a "greater understanding" of the position of Belgrade, as well as "a desire to reset relations between the two countries", the ministry said.

Dacic said that the talks he had with US National Security Adviser John Bolton and assistant US Secretary of State for Europe and Eurasia Wess Mitchell had been "very constructive" and "passed in a very positive atmosphere."

He added that Bolton told him the Trump administration believes the US policy towards the Balkans thus far had been "on autopilot - a policy that was defined 20-30 years ago."

"We will continue our contacts, I repeat, with great US support for the dialogue. It's a big change, because until two years ago when you spoke with American institutions you could only hear that the (Kosovo) issue had been resolved," Dacic said.

He assessed that his visit to the United States was "very significant, with good results for Serbia" as well as "a great opportunity to talk about resetting and revitalizing relations between Washington and Belgrade," the statement added.

Dacic said that he conveyed to President Aleksandar Vucic his impressions from the United States - that the situation was now "significantly different compared to some previous times" and that Serbia should seize that moment to come up with a solution to problems in the region together with the US administration, and to "reaffirm its foreign policy position."

"Therefore, to solve the problems in the region in a way where everyone will gain, without looking for who will lose something. That is a big change," said Dacic.