Prime Minister Ana Brnabic hosted a ceremony at the US Congress in Washington on Wednesday, the Serbian government announced. 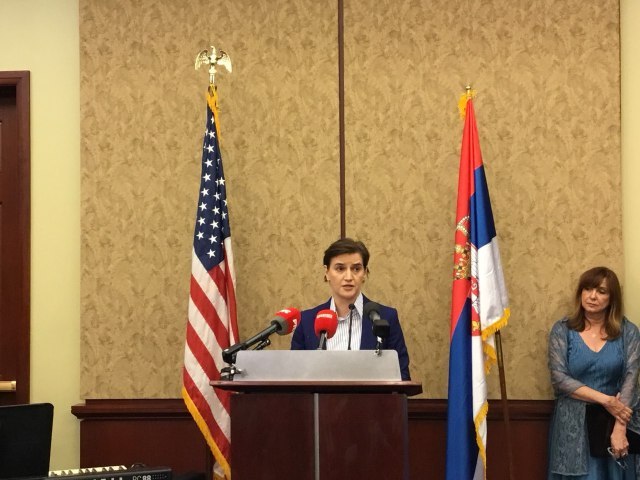 The ceremony was attended by First Deputy Prime Minister and Minister of Foreign Affairs of Serbia Ivica Dacic and numerous guests from political and public life.

Today we remember a unique event, when, 100 years ago, the Serbian flag was raised in front of the White House. Only Serbia and France had such a tribute in the history of the United States Brnabic said in her address.

I am here to thank you for the support and affection of your brave leaders since 100 years ago, said the Prime Minister, adding that the two nations shared the values of freedom and liberation.

In her address, the Prime Minister said that Serbia lost more than a quarter of its population in the Great War from 1914 to 1918, and that the entire army, the government and a significant part of the population had to escape from the country in 1915 to the Greek island of Corfu.

Our ancestors proved that they are ready to sacrifice everything they have for freedom and independence, the Prime Minister said.

Brnabic stressed that little has changed since then and that the people of Serbia continue to believe in peace, justice and freedom equally as we proved in World War II when we fought alongside those, including the United States, who believed in life, not in death, in freedom, and not in oppression, in equality, and not in supremacy.

The Prime Minister pointed out that Serbia is grateful to all its allies and partners because through history, along with it, they have always struggled to protect those values, which today are the cornerstone of the modern world.

The Prime Minister said that relations between the peoples of Serbia and the United States were at its peak a century ago.

"At that time, Serbian diplomat Milenko Vesnic met with President Wilson, and the Serbian diaspora in the United States was led by one of our greatest scientists – Mihajlo Pupin," Brnabic said.

Brnabic said that she believes that we can again reach this level of relationship today and that the joint moments of our history from the First and Second World Wars "affect our present and shaping our future".

I sincerely believe that the historical events that have united our nations, such as this one we remember today, are more important than those who separate us, Brnabic pointed out.

The Prime Minister stressed that much more is needed to be done to get back to positions not only from 100 years ago, but also from those 30 years ago, when our traditional partnership and mutual support was first put into question.

We must guard and nurture the legacy of our common struggle for freedom, which is why I am happy and honored to be here today. Also, it is equally important to constantly encourage fruitful and prosperous cooperation between the US and Serbia, both today and in the future, the Prime Minister concluded.

The Prime Minister of Serbia, at the end of her address, thanked in particular the congressman Ted Poe, the co-chair of the Serbian congressional coalition, who, as she pointed out, has been tirelessly and dedicated for years to promote friendship between the two nations and to strengthen ties between the two countries.

On behalf of President of Serbia Aleksandar Vucic, the prime minister handed over the congressman Poe a medal symbolizing the gratitude of the state and the people of Serbia for all that he did to strengthen our relations.

At the ceremony marking the anniversary, officials also addressed the bishop of East-American Irinej, Deputy Assistant Secretary of Defense of the United States of America Lora Cooper, Head of the Subcommittee for European and Regional Security Cooperation in the Senate Ron Jonson and co-chair of the Serbian congressional caucus Ted Poe.

The ceremony was attended by Marie Royce, Assistant Secretary of State for Education and Culture.

Brnabic ends the visit to the United States on Thursday.

The prime minister will have separate meetings with Senator Rhon Johnson, Chair of the Subcommittee on Europe of the Senate, Senator Tom Cotton, Senate Military Committee member and congressman Steve Stevens, the next chairman of the Serbian Caucus.

Brnabic will end his visit with participation at a round table organized by the International Republican Institute.