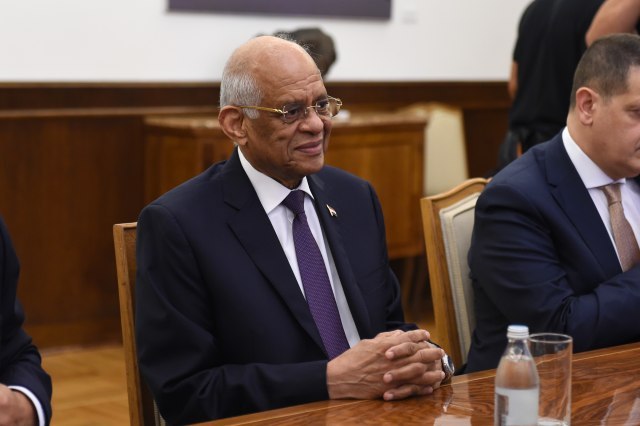 During their meeting in Belgrade on Thursday, Vucic emphasized that Egypt was "a true friend of both Serbia and the Serbian people and stressed that it is necessary to work on intensifying cooperation at all levels, especially on strengthening economic relations," the president's press service said.

Vucic expressed hope that Egypt will continue to respect the interests of Serbia in international organizations. He pointed out that Serbia in the Balkans and Egypt in the Middle East and the African continent share responsibility for the stability of these regions, which is another common point for strengthening relations between the two countries.

The Egyptian Parliament speaker pointed out that Egypt and Serbia are "friendly countries" at the regional and international levels, and emphasized that Egypt is not forgetting Serbia's support in 1973, and in 2013 in the fight against terrorism.

Abdel Aal said economic cooperation is not following political relations and added that Egypt has good construction companies working around the world, especially on the construction of bridges, canals and roads, and that he hopes Egyptian companies will soon enter the Serbian market. During the meeting, the two interlocutors also discussed the importance of cooperation in the field of construction and tourism, as well as establishment of regular Belgrade-Cairo flights.

Earlier in the day, Abdel Aal met with the president of the Serbian Parliament, Maja Gojkovic, when the two interlocutors observed that Egypt "never votes against the interests of Serbia internationally."

Gojkovic especially thanked Egypt for "being a true friend by supporting Serbia's international positions and stances."

At a joint press conference after the meeting, Gojkovic said that she and Abdel Aal had a "very good and meaningful discussion" about all possibilities of improving bilateral relations, "especially in the field of parliamentary cooperation and support on the multilateral basis."

Abdel Aal said that, prior to his visit, a friendship group with Serbia was established in the Egyptian Parliament, while Gojkovic estimated that this spoke to how invested Egypt is in its relations with Serbia. She proposed that the two delegations sign a memorandum of cooperation at the next meeting.