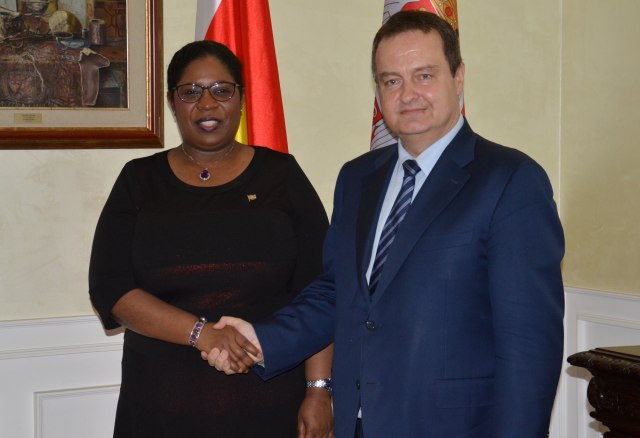 According to the Serbian government, they assessed that relations between the two countries are very good and based on mutual benefit, understanding and friendship.

The two officials estimated that relations between the two countries are based on respect for territorial integrity and non-interference in the internal political affairs of another state.

At a joint press conference in Belgrade, Dacic said he highly appreciates what the highest officials in Suriname did to develop the bilateral relations of the two countries, and that he expects the President of Suriname to visit Serbia.

Speaking about the cooperation agreement between the Diplomatic Academy of the Ministry of Foreign Affairs of Serbia and the Suriname Institute of Diplomacy, which was signed today, Dacic pointed out that this is a chance for training Serbian diplomats in Suriname and vice versa.

It is important to foster economic cooperation and cooperation in the field of education, including military education, as well as military-medical education. We want to cooperate on the multilateral level, given that our policies are similar, he said.

The First Deputy Prime Minister expressed his gratitude to Suriname, which withdrew the recognition of the unilaterally declared independence of Kosovo, adding that this was a courageous contribution to the possibility of reaching a compromise solution.

Pollack-Beighle expressed a deep and sincere gratitude to the Serbian authorities for a pleasant and warm welcome, and for inviting her and her delegation to come on a working visit.

Although we are geographically far away, Suriname and Serbia have very good relations and these relations are based on mutual benefit, mutual understanding and are also reinforced by the respect for territorial integrity and the principle of non-interference in the internal affairs of another country, she pointed out.