Ivica Dacic has said that Thursday's visit of the Egyptian parliament speaker should not be linked to Egypt revoking its recognition of Kosovo. 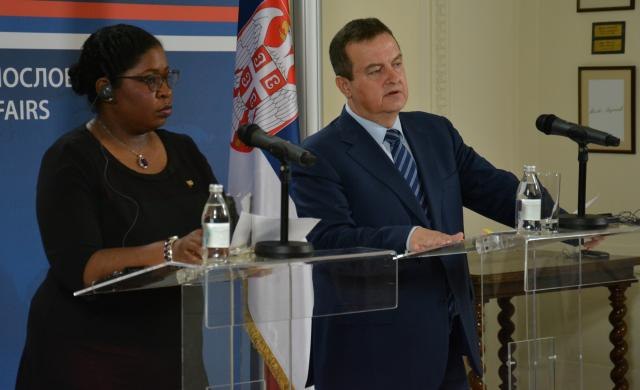 Moreover, the Serbian foreign minister continued, the case of Egypt recognizing Kosovo is "not entirely clear" - as there is no written evidence of it.

Dacic told a joint news conference with the foreign minister of Suriname, who is also visiting Belgrade, that the former Egyptian president (Mohamed Morsi) during the final days of his rule gave an order to the country's Foreign Ministry, after which a spokesman for the ministry said that Egypt had recognized Kosovo.

"There has been no written decision," Dacic said, and added that there is no information about the recognition on the website of the Egyptian Ministry of Foreign Affairs, either.

"Pristina counts Egypt among those 116 countries that have recognized Kosovo, but Egypt has not established diplomatic relations with Kosovo, and is not voting in their favor in international institutions," Dacic remarked.

The minister stressed that Egypt is also not working on establishing diplomatic relations with Kosovo. During the news conference, he thanked his counterpart from Suriname, Yldiz Deborah Pollack-Beighle, for her country being the first that had the courage to reexamine and revoke the recognition of Kosovo.

Dacic's comments come in the wake of media reports that Egypt could be the next country to withdraw its recognition of Kosovo.