Vucic and Macron meet in Paris

Serbian President Aleksandar Vucic and French President Emmanuel Macron had a face to face meeting in the Elysee Palace on Tuesday. 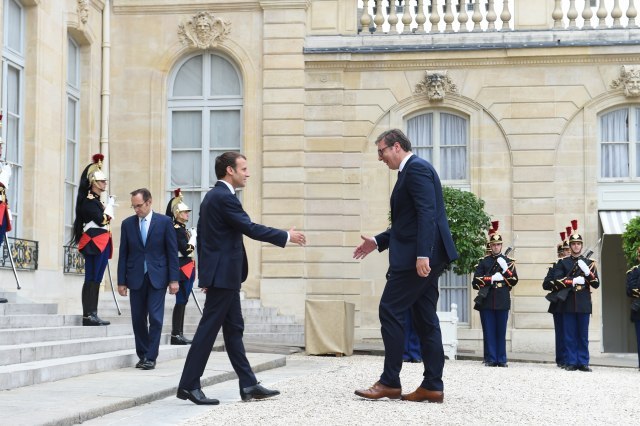 The head of the French state welcomed Vucic with military honors after which they started their meeting.

Vucic and Macron told a news conference after the hour-long meeting and a working lunch that Serbia cannot join the European Union unless it made progress in its reforms, underlining the importance of peace and stability in the region.

Macron said that Serbia could join the EU in 2025 if the country made progress in the reform process, but that it was also necessary to reform the Union by that time.

The French president said that Serbia shouldn't consider 2025 as "an automatic criterion" for the EU accession.

"I've said before that other states, too, should first take care of the key matters, like reforms. If they make quicker progress in their reforms, the (EU accession) negotiations can be closed," Macron explained.

Vucic said that Serbia couldn not join the EU without the Kosovo issue, legal system and the rule of law addressed, not even with Macron's support.

"Even if Macron says that Serbia is joining the EU right now, it will not do so before we solve our problems. You know I'm not an optimist as to how successful we will be, but I'll do my best to make it happen," Vucic said.

Macron said that "the EU reform could be completed by 2025," adding that "France has made reform proposals referring to the EU budget, defense and strategic issues."

He said that the EU wasn't operating properly because there were many differences between the 28 member states, as their views had drifted apart in the meantime.

Vucic said that he had reached a high level of agreement on key issues with his French counterpart, and that both insisted that regional peace and stability had to be protected. In addition, the region should seek solutions jointly, looking into the future, not only back at the past, the two presidents agreed.

"Serbia has won Macron's support for a compromise with the Albanians in Kosovo, making durable peace possible for all the people living in the region," Vucic said.

The Serbian president added that he had discussed the future of Serbia and the region with his French counterpart, as well as the Belgrade-Pristina talks and "sincere friendship between Serbia and France, lasting for centuries, rather than decades."

Macron said that his country wished to assist Serbia on its way to the European Union, thanking Belgrade for its help "in the security sector and fight against organized crime and illegal migration," describing Serbia as "a vital partner" in those areas.

"Serbia has played an active role in the EU accession talks, and we want to help the country solve the most sensitive issues along the way," Macron said.

The president said he supported the stability of the entire region and individual states, appealing to them not to give in to any foreign threat.

"France and Serbia share the same will to ensure regional stability, individual sovereignty and the capacity of each state of the region not to give in to any foreign influence or disturbance," Macron said.

Vucic said that they had also discussed the creation of a regional economic area in the Balkans.

"It's not a new Yugoslavia, but it is a single economic market. It's not a replacement for the EU either," Vucic clarified.

The Serbian president said that the future was the main theme, and that bilateral cooperation was improving, economic ties in particular.

Macron said that the 100th anniversary of the Great War was a reminder that France and Serbia had once fought as allies, adding that Serbian and French soldiers were together again as peacekeepers, in Mali and Lebanon for instance.

The French president thanked Vucic for having accepted an invitation to attend a peace conference in Paris, in November, saying he hoped to be able to accept Vucic's invitation to visit Serbia, fulfilling the promise he had given earlier

This meeting between the two presidents came at an important moment, on the eve of a new round of dialogue between Belgrade and Pristina in Brussels, and according to earlier announcement, Vucic and Macron will discuss bilateral relations, especially economic cooperation, the situation in the region, with particular reference to Brussels dialogue and European integration of Serbia.

Vucic's visit to France is of great importance to Serbia, bearing in mind that the last time a French head of state was in Belgrade 18 years ago.

On the eve of his departure for Paris, Vucic said he expected much from the talks with Macron. "I think that this meeting is very important for Serbia. We had not had such communication in the previous period between several French presidents and their Serbian counterparts," the president said.