Prime Minister Ana Brnabic took part on Tuesday in the 5th Summit on the Western Balkans in London. 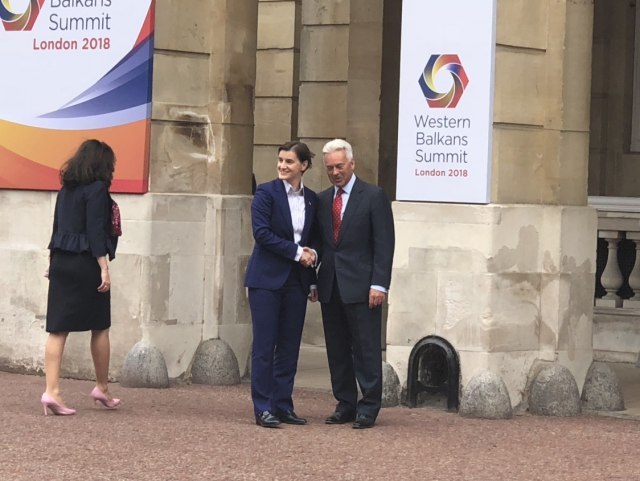 It brought together leaders of the region and top European officials to discuss current economic, political and security issues, the Serbian government announced.

The central topic of the summit is economy and regional economic cooperation. The summit was opened by British Prime Minister Theresa May, who hosted a reception for the heads of delegations.

Addressing the panel dedicated to the economy, Brnabic said that economic development is important for the Western Balkans and that a faster and more dynamic GDP growth is a joint challenge.

Speaking about the challenges in the region, she said that foreign direct investment in the region which currently stands at EUR 4 billion a year should be increased and all should work intensively to reduce the unemployment rate among young people and brain drain.

The strengthening of regional cooperation is our chance which we must not miss, the prime minister underlined.

Brnabic pointed out that the region needs a faster implementation of the Multi-Annual Action Plan for the Regional Economic Area of the Western Balkans, which was adopted at the Trieste Summit and which deals with trade, investment, mobility and digital connectivity.

The prime minister said that the region needs a new model of economic growth, based on investment in innovation and new technologies, research and development, and creating a favorable climate for start-ups.

We need to develop an economy that will focus on digitization, innovation and IT, said Brnabic, adding that the modernization of the economy simultaneously means pushing ahead the entire society.

The necessary precondition for building a modern economy is the continuation of structural reforms and the strengthening of the rule of law, she stressed, adding that the focus of work of the Serbian government is the fight against corruption, modernization of public administration and systematic introduction of electronic services for citizens and the economy, thus improving the conditions for doing business and raising quality of life for our citizens.

Infrastructure investments are the basis for a strong economy - without good infrastructure there is no development of trade, nor faster economic growth, the Prime Minister underlined.

In the implementation of the Regional Economic Area Action Plan, progress has been made in the field of mutual recognition of professional and academic qualifications, which will facilitate mobility, while the project for electronic document exchange will speed up customs and border procedures.

Brnabic also stressed the importance of the Regional Investment Platform, which was jointly prepared by regional chambers of commerce and which presents investment opportunities in the region to potential investors.

Brnabic specifically referred to the progress made in the field of digital connectivity. At the Summit in Sofia, in June this year, the Digital Agenda for the Western Balkans was adopted, which will contribute to the strengthening of capacities of e-Government and various electronic services, especially in the area of public procurement and health care.

Brnabic said that Serbia is committed to strengthening stability in the region and, at the same time, to actively contribute to the preservation of peace in the world.

According to the number of persons engaged in peacekeeping missions in the UN mandate, Serbia is ranked 10th in Europe and 3rd in proportion to the number of citizens, the prime minister said.

She highlighted the role of Serbia during the migration crisis, when our country has shown its commitment to preserving stability and European values.