Germany as "reliable partner of Serbia on path to EU" 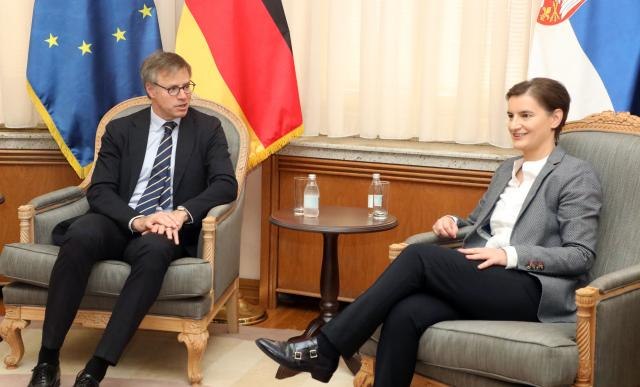 According to the Serbian government, Brnabic thanked Dittmann for his personal contribution to promoting cooperation and developing relations of the two countries.

The prime minister, referring to the fact that Germany is among the leading economic and foreign trade partners of Serbia, also assessed that this country is one of the most important investors and the largest bilateral donor of Serbia.

Brnabic pointed out that Germany's assistance is reflected in strong support to Serbia's European integration process, as well as to regional stability and cooperation, especially through the Berlin Process.

Dittmann said he was extremely pleased with the signing of the Memorandum of Understanding, which agreed on cooperation in the program of promoting entrepreneurship and self-employment, and within the German-Serbian initiative for sustainable growth and employment.

He also pointed out that improvements in the business climate in Serbia enabled the arrival of foreign companies, and that in the future, he expects an increase in German investments on the Serbian market.

According to Dittmann, the projects jointly implemented by the two countries are of great importance for the Serbian economy and reforms, and Germany will continue to be a reliable partner to Serbia on the road to the European Union.

The interlocutors agreed that the two countries have recorded historical progress in their relations, assessing that visits by top officials of the two countries and open dialogue contributed to the creation of trust and partnership in many areas.

Dittmann thanked Brnabic and the Serbian government for their support and trust during his mandate in our country, and Prime Minister Brnabic wished the Ambassador a lot of success on his new position.