Aleksandar Vucic said after a meeting of the "Balkan Four" that these countries, in a situation where Europe isn't, should be presenting a more united front. 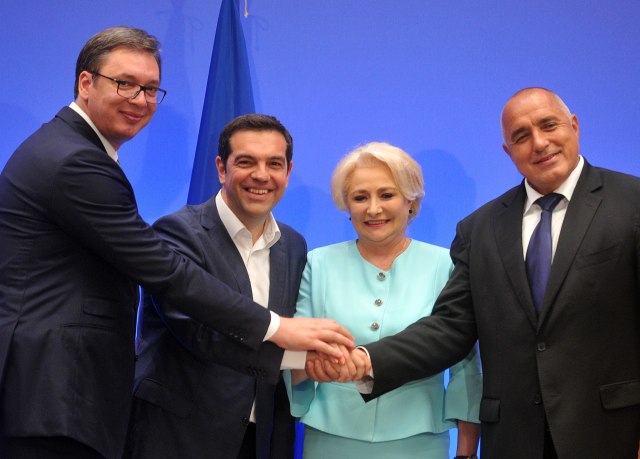 The Serbian president added that the "Balkan Four" should solve problems on the peninsula, and pointed out that this format is very important for our country, but also for the future of all four Balkan countries.

Vucic, who spoke at a joint press conference following the meeting of the High Council for Cooperation between the Republic of Serbia, the Republic of Greece, the Republic of Bulgaria and Romania, said he was pleased with this meeting, although "as a real Serb" he was "always frowning and something was lacking."

"It is important for Serbia because we have received support on the European path from our friends, it is important because we will work together on many projects. We talked about road communications, railroads, gas interconnections - longer and more seriously, more responsible than ever," he said.

Vucic said that Greece and Bulgaria have proposed joint fees and tariffs related to earlier proposals of the Danube Commission on traffic and transport.

This can bring enormous benefits to all countries, so that we can administer everything in a single way. This will bring economic benefits to the inhabitants of our countries, Vucic is convinced.

He noted that the road connection between Serbia and Romania is very bad, which is why the meeting discussed the Pancevo-Vrsac-Timisoara highway.

Also, he added, with Greek Prime Minister Alexis Tsipras, he talked about the Belgrade-Skopje-Thessaloniki railway.

He informed the participants that Serbia is finishing building its roads, will finish its part of the highway to Gradina at the Bulgarian border, as well as to the border with Macedonia, all that this "had not been done for decades."

Regarding relations between Belgrade and Pristina, he thanked Greece, Romania and Bulgaria for their readiness to hear out Serbia's position.

"I have never interfered in sovereign issues of other countries, and that includes the name of your (Greece's) northern neighbor. But there is no doubt that in Serbia, for every citizen of our country who sees that the two sides, who had opposing attitudes, have reached an agreement, this is good news, good news for the entire region. I want it to continue in this way in the future, without going into separate interests of countries," he said. he explained.

Ahead of the meeting in Thessaloniki, Greece, Aleksandar Vucic stated that he would speak primarily about infrastructure and important political issues, including Kosovo, during his address.

Vucic said he would ask Greece and Romania, which have not recognized Kosovo, to maintain that stand.

"Two of three countries have not recognized Kosovo and I will ask them to remain firm in their stand. And I will try to once again explain to our Bulgarian friends what our stance is regarding Kosovo and Metohija," Vucic told reporters.

The Serbian president said he was pleased to be able to meet, for the fourth time in this format, with the "friendly countries" Bulgaria, Romania and Greece.