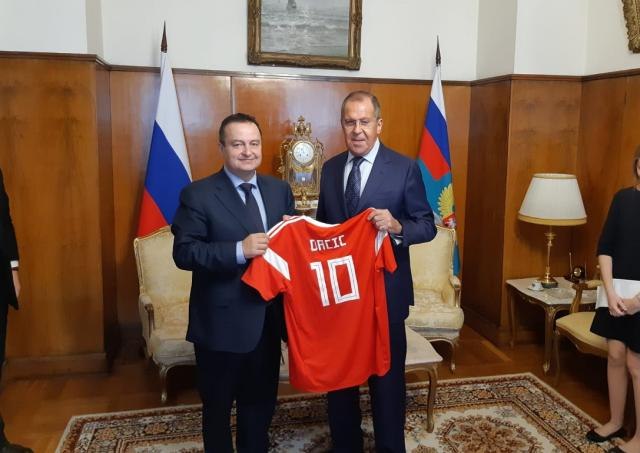 Russian Foreign Minister Sergei Lavrov said this in Moscow on Thursday, during his meeting with Serbian counterpart Ivica Dacic.

The meeting looked at the current issues of bilateral cooperation, the deepening of bilateral ties in all areas, as well as mutual support in international organizations, the Serbian government announce.

Dacic expressed his gratitude for the solid and consistent support of the Russian Federation to the territorial integrity and sovereignty of Serbia.

At the end of the meeting, Lavrov presented Dacic with a jersey of the Russian national football team, and Dacic wished them much success in the continuation of the World Cup football tournament.

Also on Thursday in Moscow, Ivica Dacic met with Deputy Prime Minister and Co-chairman of the Serbian-Russian Intergovernmental Commission for Trade, Economic and Scientific and Technical Cooperation Yuriy Borisov.

This was their first meeting since Borisov's appointment to this function.

Dacic wished him a lot of success on his new post, and expressed his firm belief that the very successful cooperation that has existed to date will continue.

At today's meeting, both sides expressed satisfaction with the quality of political dialogue and bilateral cooperation in all segments, as well as with cooperation and mutual support within international organizations.

We are grateful for the solid and consistent support of the Russian Federation to the territorial integrity and sovereignty of Serbia, Dacic said.

The interlocutors discussed the activities and plans for further development of bilateral cooperation in the following period.

Dacic and Borisov discussed improvement of economic cooperation, cooperation in the field of energy, agriculture, as well as joint projects in the sphere of economy and industry.

In addition, the two officials expressed their satisfaction with the celebration of the jubilee that is marked this year and that is 180 years since the establishment of diplomatic relations between Serbia and Russia.