Filmmaker Emir Kusturica on Tuesday spoke for B92.net about the World Cup, Kosovo, Aleksandar Vucic, and the shooting of his first film in Chinese. 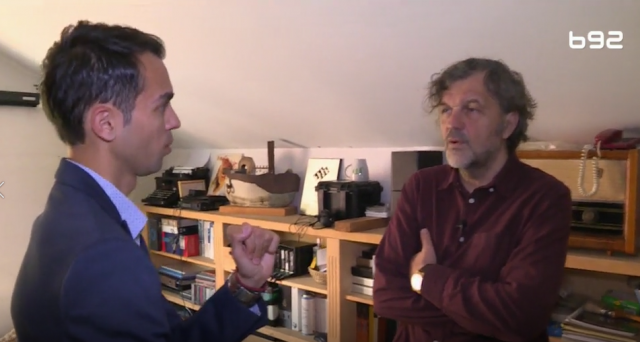 Kusturica told Filip Cukanovic that he thought Serbia is being punished for decades for its closeness with Russian - and made a connection between that and our football team being brutally robbed in last week's game against Switzerland.

He also believes that the biggest profiteers in the Balkans are the Albanians - as they have been favored and used by the West for centuries to drive a wedge between South-East European Slavs.

"Serbia has to fight for a part of Kosovo's wealth and territory - if it has to be divided. Kosovo represents one of the biggest thefts of the 20th century. I do not know if it can be solved the way we imagined, but it scares me that making big concessions could jeopardize the people and its authorities, because any type of ceding leads to the West installing somebody else in the place of the one who did it. I hope the leadership will not be stupid and allow itself to be used as disposable," he said.

Kusturica also spoke about his support for Aleksandar Vucic, and said there has always been a sufficient number of "traffickers" in Serbia who think that the whoever happens to be in power is doing everything wrong. The filmmaker said that monuments to the brothers Sokolovic and Saint Makarije would be raised in Andricgrad - and announced he was working on a new book, that will turn into a script.

The shooting of the film - in Chinese, with an exclusively Chinese cast - will begin next year, Kusturica said, and revealed that the title will be, "Just one more time."