"Great opportunities for cooperation with Bulgaria"

Prime Minister Ana Brnabic spoke on Thursday in Belgrade with President of the Republic of Bulgaria Rumen Radev, the Serbian government announced. 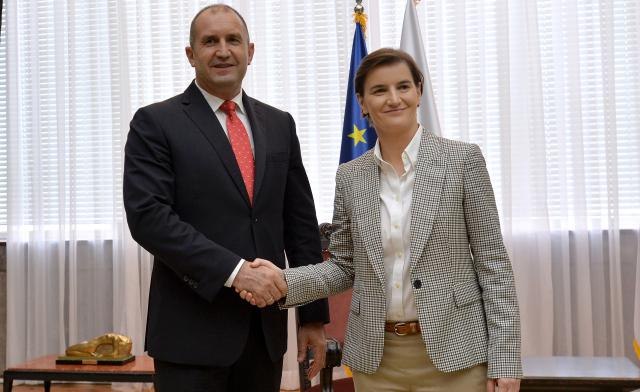 The spoke about "further development of the overall bilateral relations of the two countries, the promotion of economic cooperation and cooperation in the field of energy, as well as the current political topics in the country and region."

Brnabic pointed out that Serbia is carefully considering all projects that could provide it with stable gas supplies, especially those in which it would be a transit country.

She added that energy, agriculture, furniture production, the automotive industry and construction sectors are areas where there are possibilities for long-term cooperation with Bulgaria.

As a high potential sector, the prime minister highlighted tourism, and pointed out that 88,089 tourists from Bulgaria stayed in Serbia in 2016 and that Bulgaria was second in terms of the number of its citizens coming to Serbia, that in 2017 it grew by 3.6 percent, while in the period January-April 2018 the number of tourists from that country increased by more than 10% and amounted to more than 30,000.

Brnabic and Radev also talked about the improvement of the trade exchange, which in 2017 reached a record level and amounted to one billion euros, which placed Bulgaria on the list of the 11 most important foreign trade partners of Serbia.

The officials also said that Serbia attaches great importance to enhancing cooperation with Bulgaria in the development of road infrastructure, especially the construction of the highway from Nis to Sofia, as part of Corridor 10.

The value of contracted works is approximately EUR 341 million, noting that they are financed from loans from EIB, EBRD and World Bank.

The prime minister expressed her gratitude for the support that Bulgaria provides to Serbia on the European path, pointing out that full membership in the EU is an absolute foreign policy priority for Serbia.

She expressed her gratitude and Bulgaria's strong commitment that the EU enlargement issue be among the priorities of its chairmanship in the first half of the year.