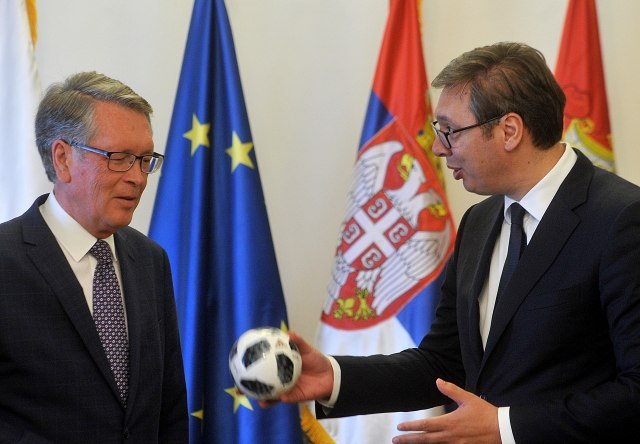 They discussed the results of Vucic's recent visit to Moscow, noting it was very important for further development of comprehensive bilateral cooperation.

Vucic told Chepurin he was highly honored by President Putin's exceptional hospitality during his visit to Moscow for Victory Day celebrations and the Immortal Regiment march, in particular by fact that he was the first foreign statesman whom the Russian president received in his new mandate.

Vucic also expressed great concern about the frequent attacks on Serbs in Kosovo and Metohija, pointing at the same time to the need to achieve a real compromise, not a solution that would only mean pressure on Serbia.

Chepurin emphasized that the support of Russia to the territorial integrity and sovereignty of Serbia is unquestionable, and will continue in the UN and in other international organizations.

The ambassador also gave the president a souvenir representing a football ball - ahead of the World Cup in Russia - and wished the Serbian national team success in the competition.