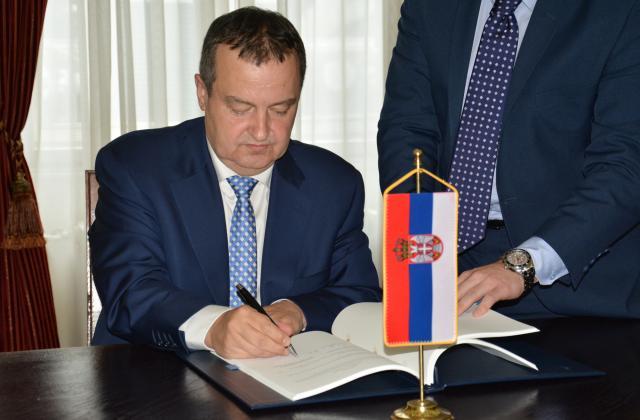 As Dacic told reporters at the Foreign Ministry on Thursday, "this is nothing new, but something that has been happening for a number of decades and centuries - the desire to establish a Greater Albania."

He said that "no one in Europe is asking about Albanian statements and actions taking place in Albania and Kosovo, while in the meantime, border controls are being abandoned, joint consular missions are opened - and then they ask Serbia what it thinks about Milorad Dodik's statement (about unification of Serbia and the RS)."

"Since they are not making their position known on what is happening with the Greater Albania aspiration, I think it's a bit cynical that we are asked for an explanation of everything Dodik is saying," Dacic said.

No one pressured Albania concerning Kosovo, he continued, and asked, "why someone is doing it to Serbia."

"Nothing surprises us," he stressed.

Commenting on the statement by Albanian Prime Minister Edi Rama, who said that "minorities are treated better in Kosovo than Albanians in Presevo," Dacic asked whether an example of a better treatment would include "expelling Serbs and setting their churches and monasteries on fire."

"Therefore, Rama is obviously playing hot and cold. His statements represent a constant threat to the EU - 'if you don't give us something, we will create a Greater Albania'," Dacic observed.

He also asked the EU how Pristina's removal of control of the border with Albania would affect visa liberalization, security, and stability.

Dacic assessed that Kosovo is a failed project, and a derivative of Greater Albania, and said it would never be realized.

"These days it is talked about how many countries have recognized (Kosovo) and how many have not. They (Pristina) themselves say there have been more who revoked their recognition last year. This means the project is unsuccessful. We do not want to talk about it," Dacic said.

He added that Kosovo should be a cause for concern to those who created it, and incited a violation of Serbia's territorial integrity, creating the possibility of tearing apart a country by a minority declaring its state.

"This problem will knock on the door of those who have recognized Kosovo, too, and when it does, they will realize how wrong they have been," Dacic concluded.