Some Albanians agree partition is solution for Kosovo - FM

First Deputy Prime Minister and Foreign Minister Ivica Dacic says some Albanian officials told him partition would be the best solution for Kosovo and Metohija. 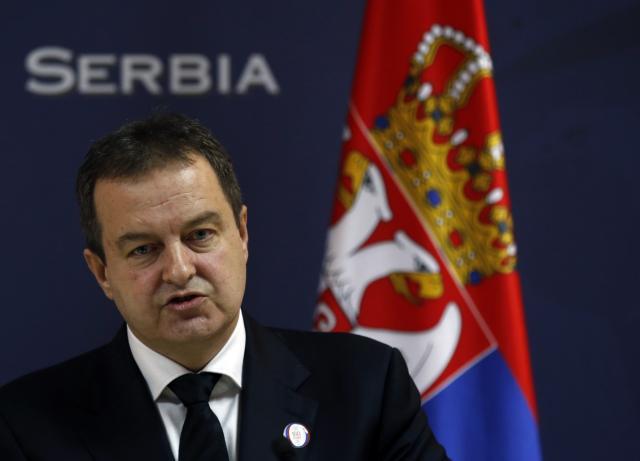 "I still, for example, claim that Albanians, if we were to sit down and talk to them without their mentors, would agree to a partition of Kosovo, because that is a good solution for them, too. Some Albanian leaders also told me this openly," explained Dacic.

He said they told him the idea was an acceptable and best solution to them as well.

"I have to admit that President Vucic has carried a lot of burden on his shoulders when it comes to the search for a solution for Kosovo. You know, it's not easy at all to be talking to and convincing a good part of the international community that they are mistaken and should revise their positions. Many in the West are intransigent and do not want to accept anything except fulfilling all Albanian demands. That cannot happen. Nothing to Serbs, everything to Albanians. What kind of negotiations are these then? These are ultimatums," he criticized.

Dacic said that he "knows that many people think Vucic and he are going to the West and talking to international statesmen and officials as if they were going to a party."

"And in fact it's a lot worse. Can someone really think that the West offers us cakes and honey? These are not at all easy things," he said.

Dacic said that he spoke to President Vucic many times about introducing reciprocity - "as they do to us, so we do to them."

"But he is the one who simmered down many times. Which in many cases proved to be right. However, I cannot allow Pristina and many from the the West to humiliate us," he said.

Asked if he really "threatened Britain" - over the country's stance on UN Security Council sessions on Kosovo - he said that Serbia is "a small country that does not threaten anyone."

"I merely said that it would be a good thing for London, but also for many others, to recall their friendship with Serbia. You can't think that we we can look kindly at the moves of certain states that are aimed directly toward grabbing our territory?" asked Dacic.

When it comes to the attitude of the Serbian Orthodox Church towards Kosovo, he said that he respects the Church and its position, but that he must say that beside the stance, he "did not see any solution being offered."

"The Church and the bishops should do their job, but politicians are the ones who decide. The easiest thing to say is, 'We won't give Kosovo away' -but people, who is giving it away? Me? Vucic? We are fighting to save what can be saved," he said.

Dacic said that he respects everybody's stance, and that he presented his own - but that he had not heard any other ideas and suggestions for decades.

"Vucic did not hear them either, who launched the internal dialogue on Kosovo. So, please... I repeat, it's easiest to criticize," Dacic underlined.

Asked which Pristina representative Serbia would most easily find the common ground with," Dacic said he "doesn't like having to talk to any of them."

"We are simply chosen by the people to protect the interests of the Serb people, rather than pick who we like to be on the other side of the table. It's difficult to negotiate with Pacolli, Haradinaj, and Thaci. You saw that to each of my arguments at the UN Flora Citaku brought up Milosevic. Come on, people, leave the man alone, he died, let's solve problems. However, they cling to their stories desperately, because they have nothing else. They have not fulfilled anything that has been agreed, but it seems they can act this way, because no one is pressing them," he stressed.