US donates US 22 million in grants to Serbia 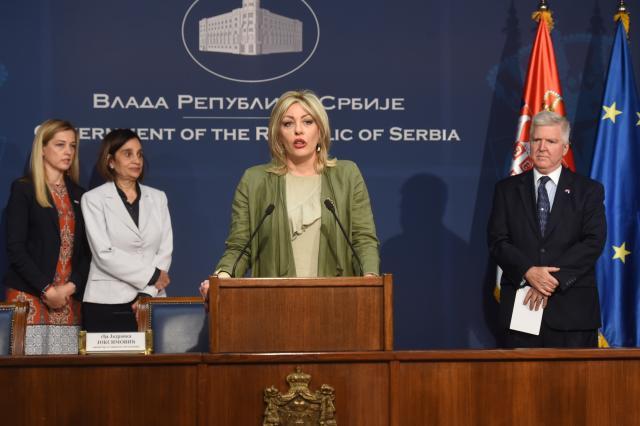 The funds are aimed at strengthening competitiveness, rule of law and strengthening the functioning of state institutions, improving the media environment and fighting corruption.

After the signing of the agreements, Joksimovic pointed out that although American and Serbian political relations sometimes have their ups and downs, the United States has since 2001 been helping the development and reforms as well as the European path of our country.

She pointed out that from 2001 to the present day, through USAID and the US Embassy in Belgrade, the United States helped the development of Serbia with more than a billion dollars in grants.

Joksimovic stated that these funds were made available to our country for reform and development and improvement of different areas of life at the local level.

She pointed out that these are not loans, but grants, and noted that it is important that the citizens of Serbia know about this segment of relations with the United States.

Joksimovic recalled that US assistance was not intended only for Belgrade, but also for local communities and smaller towns, where in the past years the US, USAID and US Embassy have helped to improve the market economy, the development of small and medium-sized enterprises, and to promote local economic development.

Scott pointed out that the years-long US assistance can be seen on a recently published interactive map that can be found on the website of the US Embassy to Serbia.

He explained that more than 1,850 points are indicated on the map, each of which represents the activity of US support in the form of renovation of schools, the asphalting of roads and the restoration of cultural monuments.

He called on all citizens of Serbia to look at the map and see how US aid contributed to their local communities in the country, and noted that the map shows only infrastructure activities supported by the US Government.

The other type of assistance, he said, includes working with governmental and non-governmental organizations on reforms that are important for the democratic and economic development of Serbia, as well as for the welfare of its citizens, although this segment may not be sufficiently visible.

Scott also said that with the help of the US, schools were rehabilitated, social centers and roads, and that electronic administration was introduced in 83 municipalities, which simplified the work of the citizens of Serbia about changing their address or registering in the register of births, deaths and marriages.