"Serbia-Cyprus relations based on firm friendship"

Prime Minister Ana Brnabic assessed on Thursday with Cypriot President Nicos Anastasiades that relations between the two countries are based on firm friendship. 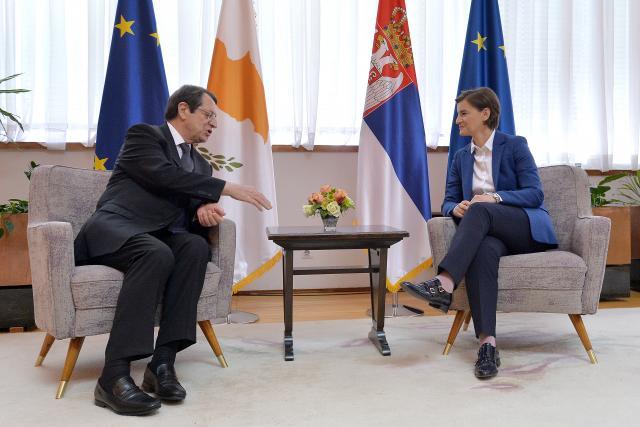 They said that these ties are also based on "historical closeness and solidarity of the two peoples as well as full understanding and mutual support in protecting important national interests."

Brnabic "stressed that full membership in the European Union is a strategic priority for Serbia, and that our country appreciates the' unquestionable support of Cyprus to our European integration," the government said in a statement.

Anastasiades "reiterated that Cyprus has a principled position on the preservation of sovereignty and territorial integrity of Serbia," and "stressed that Cyprus will continue to support the dialogue between Belgrade and Pristina with the full implementation of the Brussels agreement."

Brnabic "expressed her gratitude for the principled position of Cyprus, and stressed that Serbia supports and hopes to find a mutually acceptable solution to the Cyprus problem, while respecting all relevant United Nations resolutions."

The officials agreed on the need to use all possible potentials for expansion and deepening of mutual economic-trade cooperation.

Earlier in the day, Anastasiades met with Serbian President Aleksandar Vucic, and told a joint news conference afterwards that as long as UN Security Council Resolution 1244 was valid, Cyprus considered Kosovo's independence to be unlawful.