Serbian President Aleksandar Vucic met on Thursday with President of Cyprus Nikos Anastasiades, whom he welcomed in Belgrade earlier in the day. 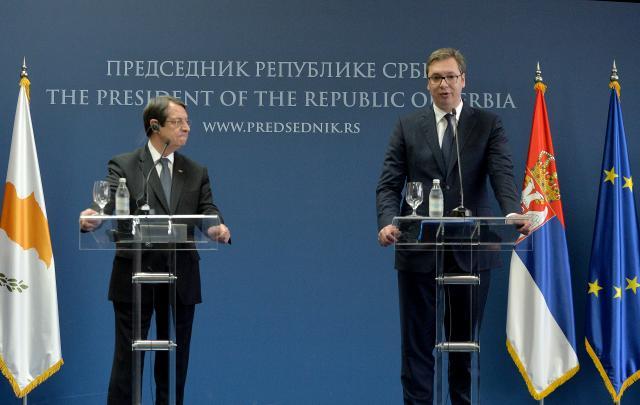 Speaking after the meeting, Anastasiades - who was throughout their joint news conference addressing Vucic as "friend" and "dear president" - pointed out that relations between our two countries are deeply rooted in historic, friendly and religious ties, and that their mutually beneficial cooperation is safe.

The same is true, continued the Cypriot president, of all the other fields for further deepening of that cooperation, "which is in the interest of our peoples."

Anastasiades told reporters that he and Vucic spoke about the European path of Serbia and Belgrade's negotiations, which, as he said, represent a "long and painful" process, bearing in mind the significant progress our country has made.

For Anastasiades, there is no doubt that the future of Serbia is in Europe, and he reiterated readiness to share with Belgrade the experience and knowledge that his country has acquired as a member of the EU over the last 14 years, regarding harmonization and alignment with the EU acquis.

Pointing out that Cyprus is an EU partner and a friendly country to Serbia, Anastasiades said he was confident that the European Council will next June, when deciding on Serbia's progress, make a "serious evaluation" and draw conclusions that would encourage the government in Belgrade to continue with reforms.

"Friend president, you can rely on our strong support for the territorial integrity of Serbia. The Republic of Cyprus does not recognize the unilaterally declared Kosovo for as long as (UN Security Council) Resolution (1244) is in force," said the Cypriot president, adding that as long as the resolution is in force, "the declaration of Kosovo's independence will be unlawful."

The high-ranking guest from Cyprus also said that he informed his Serbian colleague about the developments regarding the Cyprus issues and the challenges in the Aegean Sea.

"For our part, we are ready to resume negotiations from the moment they were last interrupted, and I repeat, I am determined in that as long as the dialogue is under the umbrella of the UN, and whose ultimate goal is to find a solution that will create an independent state, which will entail the withdrawal of all the armies that have occupied our territory, so that we can function as a normal state," said Anastasiades.

He stressed the deep gratitude to Serbia for supporting the territorial integrity and the unity of the Republic of Cyprus, and thanked Serbians for their contribution through the presence of the country's missions in Cyprus.

Vucic underlined that Cyprus is one of the EU member-states that protects in the strongest and clearest way international law, and the territorial integrity of Serbia, and thanked the president of Cyprus for this, as well as for the support given to Serbia on its path to the EU, and for the sincere friendship that his nation and state provide to the citizens of Serbia and to our country.

Vucic also thanked Cyprus for the support given to Serbia on the issue of Kosovo and Metohija.

Vucic said that he informed Anastasiades, as he said he does in in conversations with other statesmen, about the Brussels agreement "and what Belgrade has done, what Pristina has not done, and the double standards."

"But no one can talk to Serbia using the language of blackmail, ultimatums and threats, and be, without any foundation in international public law, determining that we must accept something that is the exclusively or solely the Albanian interest," Vucic said.