President Aleksandar Vucic said late on Monday that Turkey is "the biggest power and the biggest country in the Balkans." 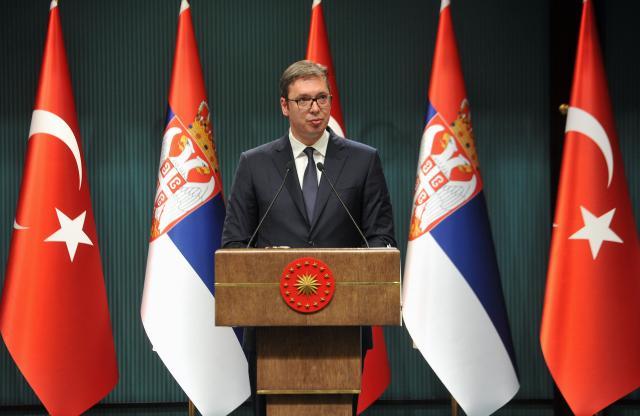 And that leaves no dilemma as to the influence and weight that this country's positions carry, he said.

"Is what Turkey thinks important? Of course it is important," Vucic said during a joint news conference with Turkish President Recep Tayyip Erdogan, and for this received applause from Turkish ministers who were in attendance.

As a relatively small country Serbia understands excellently what it is that Turkey, Russia, the US, the EU, and China think, Vucic explained, but underlined that Turkey was in the region:

"Turkey is here, here in the Balkans, and that is very important for our country."

Vucic then asked "how it's possible for someone not to see what influence Turkey has on other countries," Vucic recalled that Turkey is increasingly present in Serbia economically, and pointed out to the wider context of that influence in Serbia and in the region.

"It's very important for us to have good, partner relations with Turkey and to preserve peace and stability," he said.

Vucic also revealed that he has been recently receiving threats "via a website from central Serbia," adding that this was "nothing new, because he faces it every day," and that he found it "funny" that if such threats had been sent to somebody else, "all associations and political parties would have jumped up."

Speaking in Ankara, Vucic also commented on Kosovo PM Ramush Haradinaj's statement that Serbia "doesn't understand who won and who lost," to remark that such arrogance never produces victorious results.

Vucic told reporters that Haradinaj in the past "lectured about how many of whom there are."

"Clearly he's an expert in law, state, constitutional and legal order. I congratulate him on that. For us it is more important that it's completely clear they have no intention of making any compromises. They think that Americans and some others bombing Serbia was their great victory and that they should take from that everything that didn't belong to them. I've always said that it's important, and I hope and I fight to arrive at a solution, that it's necessary for the future," Vucic underlined.

He added that "it's not good if someone thinks the solution is in them getting everything, while the ones they're negotiating with are being humiliated in every possible way."

"When Haradinaj speaks about Medvedja (a town in the southern part of central Serbia) he's forgetting that there are less than ten percent Albanians there. If that's how you calculate then I don't know what else to say," Vucic said.

He observed that "those who essentially won't do it, could tell Albanians 'enough', the ones who participated in creating the so-called independence of Kosovo, while those who want to are saying it every day, and that's why they are forced to negotiate with us."

"They think it's a necessary evil, that they must put up with some Serbs and some Serbia. A victorious result is never born out of such such arrogance and I plead with them to continue this way," he said.

Speaking for Prva TV from Ankara earlier in the day, Vucic said it was "impossible for Turkey to change its position" regarding its recognition of Kosovo.

The presidents of Serbia and Turkey on Monday stressed their firm commitment to the fight against terrorism and announced further cooperation in that area.

Responding to Turkish journalists' questions regarding the terrorist organization FETO, Erdogan that the organization owns schools in Serbia, but also underlined that Vucic had taken a "clear and positive attitude" for which Erdogan said he was "especially grateful."

"We will continue to cooperate on this issue because it is a virus that must be exterminated," Erdogan said.

Vucic previously said that Serbia was "never hiding" that it could not support participants in coups, "and those who would like to topple democratically elected authorities."

Turkish journalists also asked Erdogan about the behavior of the West because of Turkey's influence in the Balkans.

"Of course, the West has problems with Turkey's active activities in the Balkans and is bothered by these activities," he said, adding:

"But whether or not it bothers them, we will especially in the Balkans do everything to strengthen peace and stability."

The Turkish president also said that the volume of trade between his country and Serbia exceeded a billion dollars last year for the first time, adding, "we will raise that to two billion and later to three billion."

Vucic said trade between the two countries would rise dramatically this year, as first quarter growth was 31.4 percent, so that USD1.3 million is expected at the end of the year.

Erdogan said he was honored by the possibilities of Turkish investments in Serbia, adding that jointly investing in third countries had been considered.

"We want to encourage foreign investment, for them to invest in Serbia as much as possible. We have seen the desire of our businessmen to invest. We want joint investment in third countries," he said.

Erdogan said the May 7 meetings were a part of the effort to establish peace in the region.