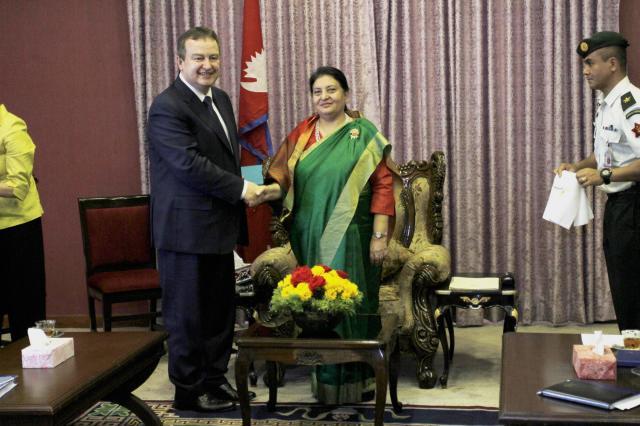 Dacic spoke with President of Nepal Bidhya Devi Bhandari, the Serbian government announced, adding that the conversation was cordial, and that the officials "pointed out that the relations of the two countries are traditionally friendly, based on mutual trust and understanding."

Dacic and Bhandari discussed the current situation in Serbia and Nepal, as well as on the most important international issues.

Dacic "outlined the most important political priorities of Serbia, especially the importance of Kosovo and Metohija to Serbia" and expressed his gratitude to Nepal in respect of the non-recognition of the unilaterally proclaimed independence of "Kosovo" and presented the current situation in Kosovo and Metohija.

Dacic conveyed to the president of Nepal the greeting of President of Serbia Aleksandar Vucic, and expressed hope that Bhandara will soon visit Serbia, according to a statement from the Ministry of Foreign Affairs.

"In a cordial and friendly conversation, Dacic reiterated his gratitude to Nepal for an excellent organization of his visit, and stressed Serbia's desire to exchange visits at the high and highest level between the two countries more productively," the Serbian government said.

According to this, Dacic "informed Oli in detail about the exceptional importance that Kosovo and Metohija has for Serbia, as well as about the current situation in the southern province" abd expressed his gratitude to the government of Nepal for supporting the defense of the territorial integrity and national sovereignty of the Republic of Serbia, and expressed his hope that Serbia and Nepal will continue their cooperation in the field of protection of the basic principles of international law.

The prime minister of Nepal stressed that relations with Serbia are "extremely good and friendly." He recalled the strong opposition of Nepal to separatism, and pointed out that Nepal will continue to provide full support and cooperation when it comes to the struggle of Serbia to preserve territorial integrity and sovereignty.

Dacic also gave a lecture at the prestigious International Affairs Council of Nepal, on the topic of "Serbia in the region, Europe and the world."

He "informed the audience about the current situation in the Western Balkans region, the process of Serbia's accession to the European Union, as well as the situation in Kosovo and Metohija."

The minister referred to the long tradition of friendly relations with Nepal, and presented Serbia's vision of further development of bilateral cooperation between the two countries.

With the aim of deepening relations, Dacic said that the Republic of Serbia plans to open a consulate in Nepal, headed by an honorary consul, and confirmed that Serbia is considering abolishing visas for Nepalese citizens.

The speech of the Serbian Minister of Foreign Affairs was an excellent opportunity to bring Serbia closer to the academic public in Nepal in the context of the Western Balkans, Europe and the world.

Dacic also visited the Nepal Chamber of Commerce in Kathmandu, where he "expressed satisfaction with the visit to Nepal, and stressed that relations between Serbia and Nepal are traditionally good, based on mutual understanding and trust."

He underlined that next year, Serbia and Nepal will mark the 60th anniversary of the establishment of bilateral relations, and expressed the hope that the businessmen of the two countries will take part in marking this significant anniversary and give impetus to the development of relations.

"I am very pleased with the progress made in recent years in the economic cooperation between Serbia and Nepal, especially through the presence of Nepalese companies in Serbia. First of all, I refer to CG Corp, which operates within the Chaudhary Group from Kathmandu, and which opened in Ruma on October 5, 2017 its first European factory of noodles and other semi-prepared pasta dishes," Dacic said.

He stressed that Serbia is interested in improving economic relations with Nepal, both in increasing trade and in investment and participation in infrastructure and other projects in Nepal.

According to Dacic, the Serbian economy has strong agricultural potential and is interested in offering agricultural products and scientific and technical cooperation in the field of agriculture to Nepal.

Bearing in mind the distance between the markets and insufficient knowledge of the economic potentials of the two countries, he proposed more frequent meetings of Serbian and Nepalese businessmen, the organization of promotional activities aimed at presenting the two economies and their possibilities for cooperation.

The Nepalese businessmen accepted the proposal to visit Serbia in September this year.

"I assure you that you will have competent and good-intentioned interlocutors in the Government of the Republic of Serbia, that is, in the Serbian Chamber of Commerce and the relevant economic institutions, and of course in the Serbian embassy in New Delhi, which are at your disposal for all the information and advice you need in the assessment of your interests and opportunities for doing business in our country," Dacic concluded.