Relations between Serbia and Turkey "better than ever"

Aleksandar Vucic said in Istanbul on Sunday that the credit for the very good relations between Serbia and Turkey belonged tot Recep Tayyip Erdogan. 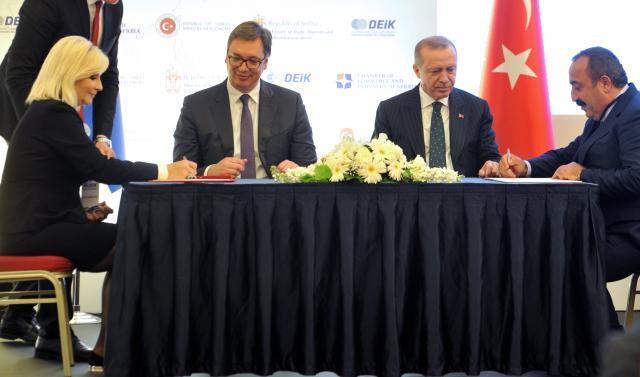 The Serbian president also invited Turkish companies to continue to invest in Serbia.

He said that Serbia and Turkey could not establish "relations as good as these" for many years, and added that the welcome he received from Turkish President Erdogan meant a lot to Serbia and was "an obligation to, in the future, not only care but show the greatest possible respect to you personally and your country and your great people."

He then added that Serbs are "strange, but good people" who are also "very loyal friends," and that those who are friends to Serbia can always count in its friendship.

In his speech, Vucic remarked that Turkish media are saying that relations between the two countries have never been better, and are like they had been "during the time of Kemal Ataturk and King Aleksandar."

"I don't know if we're there yet, but The largest portion of what we achieved, we achieved thanks to the enormous effort, labor, energy and desire of President Erdogan to establish these ties," Vucic told the Serbia-Turkey Business Forum.

Vucic said Serbia and Turkey had increased their trade by a factor of nine over the past decade, and that it had risen more than fourfold since a free trade deal was signed.

Erdogan also spoke to say Serbia was a friendly country to Turkey, one that way key for stability and peace in the Balkans.

In addressing the business forum, he said there was strong will from both sides to further improve relations.

President Vucic arrived in Turkey for a two-day visit earlier on May 6. His Turkish counterpart met him at the Istanbul airport.

During his visit, Vucic will take part in the first session of the High Cooperation Council of Serbia and Turkey, which was founded when Erdogan visited Serbia in October 2017.

The Serbian president will spend May 7 in Ankara, where he is slated to have separate meetings with Erdogan and Turkish parliament Speaker Ismail Kahraman.