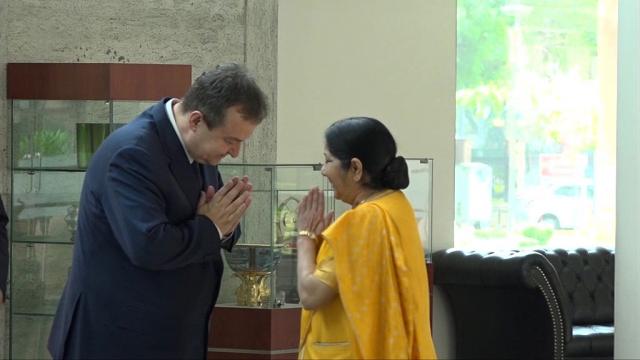 They spoke about "bilateral cooperation and intensification of political dialogue between the two countries," and "agreed that friendly relations and cooperation are at a very high level, encouraged by last year’s visit of the then prime minister of Serbia and now President Aleksandar Vucic to India."

Dacic and Naidu "expressed satisfaction with the decades long traditionally friendly relations between Yugoslavia, whose successor is Serbia, and India, that originate from the time of the Non-Aligned Movement, of which the two countries were founders."

The two sides "expressed the wish and readiness to make concrete steps to intensify political dialogue at the high and highest level and make an overall improvement of cooperation," with the upcoming visit of the vice president of India to Serbia, the first at this level in many decades, "giving a special contribution to that."

Dacic "expressed gratitude of the government of Serbia and the Serbian people on India’s support to the territorial integrity and sovereignty of the Republic of Serbia through the non-recognition of the unilaterally proclaimed independence of Kosovo" and his conviction that India will remain on this position, which is based on international law, in the future.

Naidu "confirmed that his country will not change its position regarding the non-recognition of the unilaterally proclaimed independence of Kosovo," the Serbian government announced.