SPS officials Predrag Markovic, Aleksandar Antic, and Nikola Nikodijevic on Tuesday laid a wreath at the tomb of Dimitrije Tucovic in Belgrade. 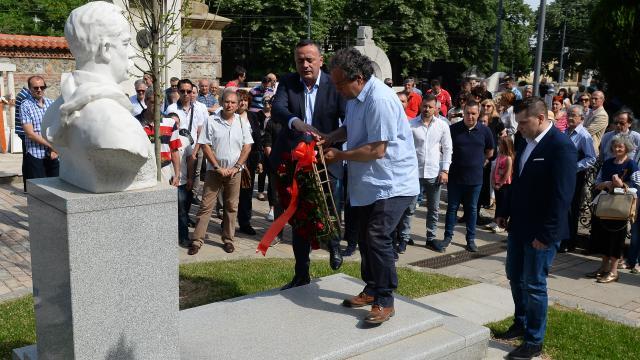 The the ceremony - held on the occasion of International Workers Day - was attended by supporters and members of the Socialist Party of Serbia (SPS), a member of Serbia's ruling coalition, whose leader is Ivica Dacic.

SPS Vice President Aleksandar Antic congratulated citizens Labor Day and stressed that Serbia was "developing economically - and that at the moment is the key, the most important goal that the Serbian government and the president of Serbia are trying to implement."

According to him, "only an economically strong Serbia can be socially responsible and workers' rights can be developed in such a country."

Deputy SPS President Predrag Markovic pointed out that the SPS was "the only party with long continuity, unlike other parties that have existed for 10, 20 years" and that the Socialists can rely on the legacy of Dimitrije Tucovic, "who was a great socialist and a great Serb."

"Such are the Socialists today," Markovic emphasized.

Tucovic was a prominent leader of the socialist movement in Serbia and one of the founders of the Serb Social-Democratic Party.

He died during the Battle of Kolubara on November 20, 1914, as an officer in the Royal Serbian Army.