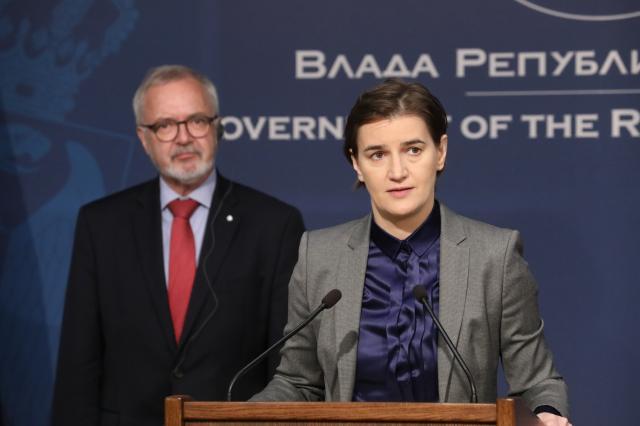 They spoke about "current projects implemented by Serbia with the EIB, estimating that these projects are significant for the citizens of Serbia because they show why the European Union (EU) is useful to them."

At a joint press conference with Hoyer in the Serbian government, Brnabic said that the projects that Serbia is implementing with the EIB are the best indicators of the importance of the EU.

She said that the total value of joint projects with the EIB in the last ten years amounted to EUR 7 billion and pointed out that at this moment the value of the projects that Serbia is implementing with the EIB, which are at various stages, is EUR 1 billion.

The prime minister pointed out that most of Serbia's health-care projects are done with the EIB and that one of the best examples is the Clinical Center in Nis which was completely built in this cooperation.

Brnabic added that the pillars of cooperation are also projects in IT, research and development amounting to approximately EUR 65 million, as well as water and wastewater treatment projects amounting to about EUR 50 million.

According to her, EUR 70 million will be invested in projects of computer networking in schools in Serbia.

By the end of the mandate of this government, Serbia will be a country that will look different, Brnabic said.

The knowledge of the citizens of Serbia about the digital world is higher than in many other European countries. Here we are talking about the creative side of digitization. It is not just a technical connection, but a new level of creativity, Hoyer said.

He said that investors like projects in Serbia and that he sees the prospects for transport and infrastructure projects in this region, adding that the goal is to bring the life of Serbia's citizens closer to that in the EU.