Vucic and Mogherini "don't agree on everything"

Serbian President Aleksandar Vucic spoke on Thursday afternoon in Belgrade with EU foreign policy chief Federica Mogherini, who on a tour of the region. 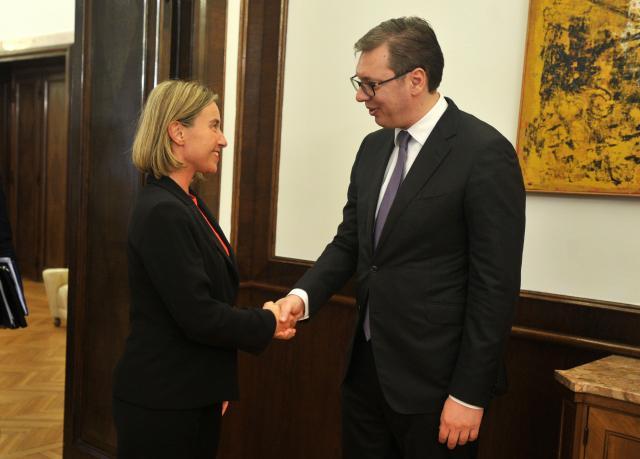 Vucic told a joint press conference that he talked with Mogherini about EU accession negotiations chapters, both those where Serbia has made progress, and those where the European Commission says no progress had been made.

The president said he and his guest "did not agree in everything."

"We paid particular attention to work done on the rule of law. We spoke about the implementation of the Commission's recommendations. We think that we are doing a good and important job for our country, for legal security," Vucic said.

He added that regional stability was also discussed, as well as Kosovo and Metohija.

"When you arrive at the Kosovo issue, then in Serbia we have a lot to say that is a different viewpoint from what many EU member states say, as well as Pristina. I am grateful to Federica Mogherini. People appreciate the work of those fighting for equal standards that would apply to Serbia and others, therefore Mogherini is highly appreciated in Serbia," he said.

Vucic added that this opportunity, as well as the upcoming EU-Balkans summit in Sofia, "serves as an additional impetus for progress towards the EU and economic progress."

Mogherini said that she would "always insist that Belgrade and Pristina fully meet their agreements in Brussels."

"I always insist that it is necessary to fully conduct that which has been agreed on. I have reiterated again and again that we must get to work where the formation of the Community of Serb Municipalities is concerned. Other elements of the agreement must be conducted, which have not yet been realized," she said.

"I will not merely monitor but will additionally work so that we can secure other steps," Mogherini said, while Vucic remarked that he was "sure that Albanians would not meet their obligations stemming from the Brussels agreement," and that he disagreed with Mogherini that there were other things that needed to be fulfilled as part of the agreement.

Mogherini also said that she condemned every act committed against institutions such as the National Assembly.

Vucic repeated that all organs of the Republic of Serbia condemn the behavior of Vojislav Seselj in the Assembly.

Asked about his reaction to the EU condemning Seselj's behavior, but keeping silent when Ramush Haradinaj and Hashim Thaci make their statements, Vucic said that Serbs "need to learn one thing, and that is that we are not always in the same position."

"If I were to tell you everything I think about Haradinaj's and Thaci's statements, I'm afraid I would not do best service our people in Kosovo and Metohija, or to our European path. Accept my restraint," said he.