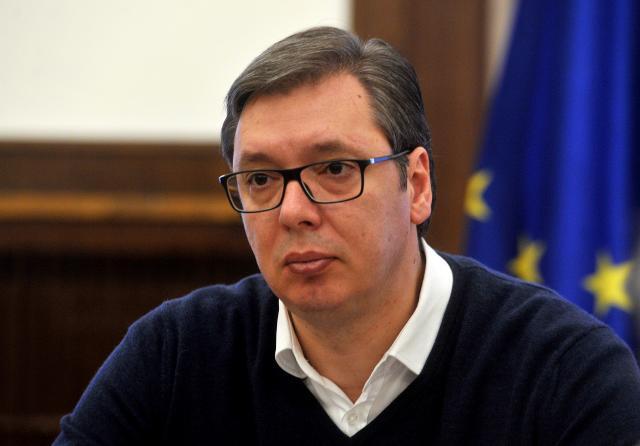 Vucic made this comment after Ramush Haradinaj told Belgrade-based Happy TV that Kosovo "does not have a foreign policy and belongs to the club led by America." During the same interview, the Kosovo prime minister was asked if he ever killed anyone, and replied, "I don't know, probably, war is war."

Speaking about Kosovo on Tuesday, Vucic said, "e are always facing difficult moments, whether we can or can't do it, we'll see."

On one side, he continued, there's us in Serbia - "on the other side are Pristina authorities, but there's also Americans, as you have been able to hear from Pristina's Haradinaj. He admitted that he has no foreign policy. If you don't have that pillar of statehood, I don't know what you are asking from us."

According to Vucic, Serbia is above all talking to the United States, "and then to the UK and some EU countries that perceive Kosovo dramatically differently."

"Politics is such that both sides must always be to blame, both must be reined in, and especially Serbs must always be guilty of something. Each time they (Pristina) beat or arrest (somebody) from Serbia, they always call on both sides to show restraint. That's their language, we've learned that, because they support Pristina," he said.

Vucic also said that he thought the time was not right for Haradinaj "to make address in Serbian media," but added that he was not the editor of those media - and observed that he was "banned from Kosovo (media), because they fear what I might say."

"In the Kosovo issue our opponents are not Albanians, but those who created that state and grabbed that territory from us," Vucic said, and recalled that "Kosovo's independence was declared in 2008, Serbia gave it legitimacy with a clumsy question before the International Court of Justice" - adding, "and I don't understand the critics who supposedly fear that I will hand over the territory of Kosovo and Metohija."

Vucic also said that Serbia "conducts an independent foreign policy, sits on its own chair - but those who think it is possible to develop anything on the European continent without Germany's support, with which we have good relations, is mistaken."

"Germany is, beside France and Italy, certainly the strongest and the most important EU country," he said.