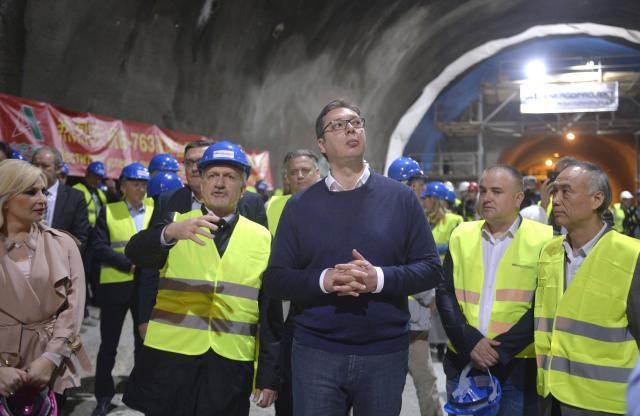 The Serbian president said this on Friday, apparently in reference to the deadline Serb representatives in Kosovo gave authorities in Pristina to form the Community of Serb Municipalities (ZSO), before they do it themselves.

Setting up the ZSO is Pristina's obligation stemming from the 2013 EU-brokered Brussels agreement.

According to Vucic, "the essence of all the events in Kosovo, in particular these last days" is Kosovo authorities' wish to occupy northern, majority-Serb north.

"Everything else are fabricated stories. That's all they're interested in and everyone in Serbia should know that," he told reporters while touring a construction site on the Corridor 11 highway section between Lajkovac and Ljig in western Serbia.

When asked to comment on Kosovo President Hashim Thaci's statement that the Serbian Army "can enter Kosovo, but the soldiers will not go back" - and another by Kosovo PM Ramush Haradinaj, who said he "needs" northern Kosovo - Vucic replied that he "has nothing to say" and that he was "aware of their desires and intentions."

"They're big, powerful, and strong, just like their sponsors, while we are a small people that can be beaten, they can do anything, and have the support of the western public for that. Imagine what would happen if some NGO invited some official from Kosovo (to central Serbia) and we burst into the gathering and battered them," the president said, in apparent reference to the arrest on Monday in Kosovo of Serbian official Marko Djuric.

The reason Pristina gave for the arrest was Djuric's alleged "entry without permission" - but Vucic said today his trip took place "legally, both under our and their rules."

At the same time, he criticized having "few allies in our country" to solve the issue of Kosovo.

"There have been few people who dared speak the truth and take the risk, because they knew they would upset Albanian sponsors. Some people prefer to go to a reception and be pampered there, and think about themselves more than about Serbia. I think about Serbia and our citizens," said Vucic.

"They told Pristina that the condition for visa liberalization was demarcation of the border with Montenegro, not the ZSO. They did not want to, it has not been made a condition, although we have been waiting for five years for that minor thing from the Brussels agreement (to be implemented), that was their (Pristina's) only obligation - they did not meet it," he said.

"That document is valid and must be implemented in practice," Vucic also said of the agreement.

The president stressed that EU foreign policy chief Federica Mogherini "told Thaci they will have to form the ZSO."

"Thaci then said they will have to - and the day he said it, they did what they did. They will repeat it to prove how nice they are to the international community. They are lying all the time, I know them very well, whatever they say is a lie. They don't want to start forming the ZSO," Vucic said, and added:

"Why didn't they invite Serbs to talk, they're waiting for them? If they prove they didn't lie April 20 won't happen. In case they lied again - well then what do you want from us? We'll wait and see if they are such liars, we hope somebody from abroad will make them... Fulfill that Brussels agreement, don't lie to us and waste our time, and that's that."