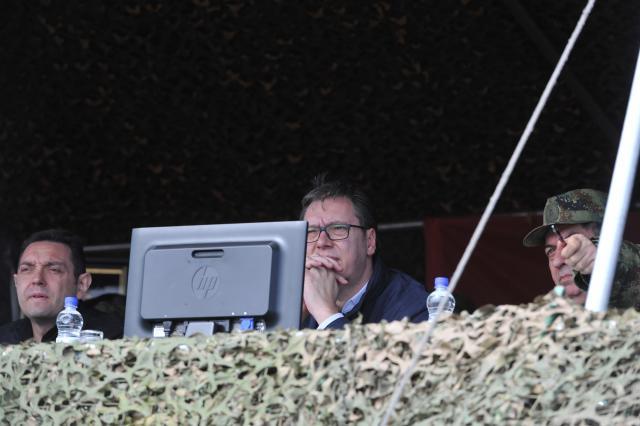 The defense minister also told TV Pink on Friday that the EU has "recognized that Serbian President Aleksandar Vucic must be talked with it they want peace in the region" - because the situation "came to the edge" after Monday's incidents in Kosovo when Serbian official Marko Djuric was arrested.

Vulin described Vucic as "patient," but said that he "personally" would have respond to the attacks on Serbs with "a show of force" - however, the president was there "to say that diplomacy existed."

"As you've seen, he was right. However, it's important that we send a message to everyone - there will be no repeat of the March Pogrom, there will be no new (operations) Flash and Storm," the minister said, referring to past large-scale attacks on Serbs in Kosovo, and on ethnic Serbs in Croatia.

Commenting on Kosovo PM Ramush Haradinaj saying that he "has not read the Brussels agreement" - reached in 2013 as part of the EU-sponsored Belgrade-Pristina dialogue - Vulin said it was "hard to negotiate with someone who started his career as a terrorist killing people."

"Pristina's message is, 'we want northern Kosovo, but not Serbs, we want (Serbian Orthodox) monasteries, but not the SPC (Serbian Orthodox Church)',"he stated, and added that Haradinaj and Kosovo President Hashim Thaci are "united when it comes to Serbs, otherwise they clash" - and that he "heard the ugliest things about Haradinaj from Thaci."

The brutal attack on Serbs in Kosovska Mitrovica and the arrest of Marko Djuric on Monday was described by Vulin as "a terrorist attack and a kidnapping. "

"States arrest, terrorist organizations kidnap. Them in Pristina saying that they have confirmed their sovereignty with a terrorist attack - in that case Al Qaeda and Islamic State would be sovereign in the same way," Vulin stressed.

The defense chief also said that the Serbian Army "does not receive orders from the outside" and can only get them from the president.

"As for Thaci and his immense courage, last time he was running before the Yugoslav Army (VJ). Next time he will be crawling before the Serbian Army, if only need be," Vulin concluded.