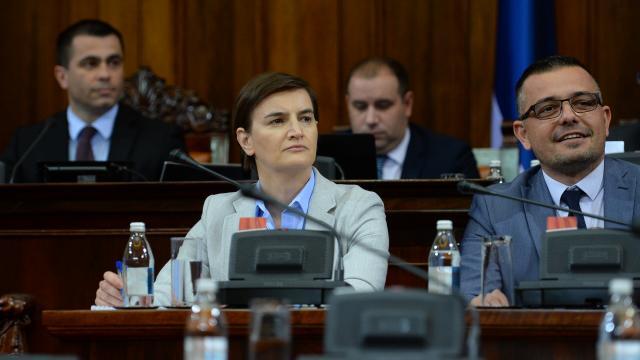 Speaking in the Serbian National Assembly on Thursday, the prime minister noted that the formation of the ZSO was a part of the Brussels agreement - brokered by the EU in 2013, within the Belgrade-Pristina dialogue - and that "it must be implemented."

"Agreements must be honored. There will be no further talks on the Community of Serb Municipalities. We will give nothing else, because it is in the Brussels agreement," Brnabic said.

The prime minister also stated that the Brussels agreement was "Serbia's diplomatic victory," and added that proof of this was Pristina not wanting to implement it.

"Today also we insist on the implementation of the Brussels agreement. Is it our fault that Brussels (EU) doesn't respect sufficiently its own signature, time and energy to be the agreement's guarantor?," Brnabic asked during an Assembly session dedicated to deputies' questions, and stressed that the agreement is "absolutely in the interest of citizens of Serbia."

Tanjug reported that she then "asked rhetorically" if anyone thought Pristina would not implement the agreement if it was in its interest, and reminded the Assembly of the agreement signed by Borko Stefanovic - from the now opposition DS party - that concerned "integrated border management" - which was "immediately implemented, because it was completely bad."

"Everyone now goes back to it stating, 'border'. When you have agreements like that, everyone's falling over themselves to implement them," Brnabic said.