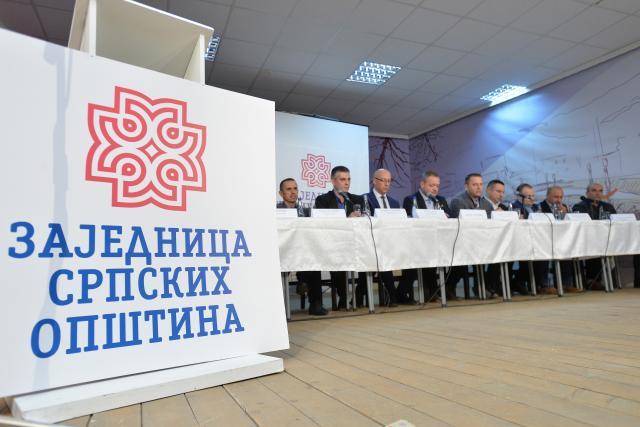 They announced establishing the Community of Serb municipalities (ZSO) themselves, unless Pristina took "concrete steps in the next three weeks" to do form it.

The councilors are also demanding that those who gave the order to attack the participants of an internal dialogue on Kosovo meeting in Kosovska Mitrovica on Monday be punished, and are asking international missions to increase vigilance and "act preventively in the event of attacks on members of the Serb people."

The meeting was declared open by the chairman of the Municipal Assembly of Northern Kosovska Mitrovica, Dejan Guresic, who said the session was called in urgent procedure "due to the situation."

On behalf of all councilors from the ten Serb majority municipalities in Kosovo, he strongly condemned Monday's "vandal act of inappropriate use of force against Serbs and their political representatives, as well as the kidnapping of Marko Djuric."

The session is attended by 120 councilors, with the logo of the Community of Serbian Municipalities shown on the stage. b92.net reporter said that loud speakers were install in front of the venue, Mitrovacki Dvor - where Djuric, the director of the Government Office for Kosovo and Metohija, was arrested on Monday - to allow those Serbs who gathered in front of the building to hear what was being said inside.

Kosovo Minister of Local Self-Government Ivan Todosijevic assured Serbs in Kosovo that "our state Serbia will help us, as will God, because justice and law is on our side."

"Brussels agreement is not being implemented for five years, which is how long we have been asking for the ZSO to be formed. The ZSO is a blood political issue for us," Todosijevic said.

He recalled that the ZSO is an international obligation, "and not a Serb whim."

After the decision of the Serb List to leave the Kosovo government and form the ZSO themselves, threats that they would be arrested came from Pristina on Wednesday.

Serbs, Guresic added today, are determined, despite pressure from Pristina and the EU. "We have heard that they will arrest us. Let them arrest us, if they can arrest us all. We are committed to peace, our position is dialogue, conversation, and peace," Todosijevic said. He criticized EU representatives for not showing up at the gathering.

Ksenija Bozovic from GI SDP, whose leader Oliver Ivanovic was shot to death in Kosovska Mitrovica early this year, said the representatives of Serbs should have gathered in this way when Ivanovic was killed. She recalled that on several occasions, even from jail, Ivanovic said that Serbs should organize themselves and create the ZSO. GI SDP condemned the incidents during which Marko Djuric was arrested, Bozovic said, and told other party leaders to "come out among the mothers and the citizens and see how scared they are."

At the request of Serb List leader Goran Rakic, the meeting symbolically began at 12:44 hour CET, a reference to UN Resolution 1244, and had only one item on the agenda - the political and security situation in the north of Kosovo and Metohija.

The Serb List announced on Tuesday in Belgrade they were leaving Kosovo institutions and would form the ZSO on April 20 - the fifth anniversary of the signing of the EU-brokered Brussels agreement between Belgrade and Pristina.