Serbs to leave Kosovo government, form ZSO on their own

The Serb List will leave the Kosovo government, and then early next month start forming the Community of Serb Municipalities (ZSO) on its own. 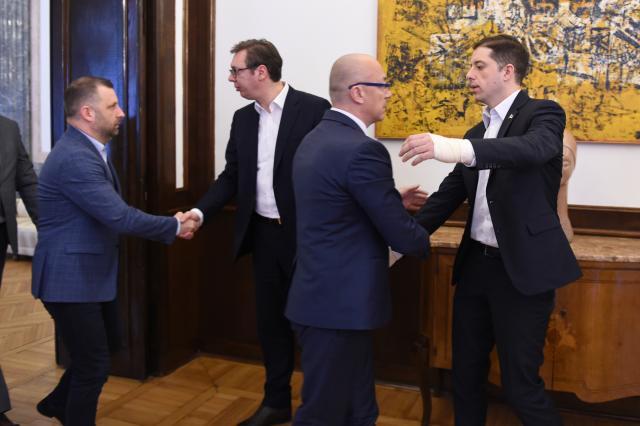 The formation of the ZSO is an obligation undertaken by the authorities in Pristina under the 2013 Brussels agreement, but it has not yet been fulfilled.

The announcement today was made by Goran Rakic, after representatives of the Serb List held a meeting in Belgrade with President Aleksandar Vucic, and Director of the Government Office for Kosovo and Metohija Marko Djuric.

Rakic said that Vucic was "informed about this" and said he would "support any decision they make."

Earlier in the day, reports said that the night and the morning went peacefully in Kosovska Mitrovica, whered the situation was described as calm, but still tense after yesterday's incidents.

Also, the Serbs had set up a blockade on the main road Pristina-Raska road, while about 50 trucks were stuck at the Jarinje administrative line crossing.

According to reports, members of Kosovo special police forces, known as ROSU, were present this morning on the streets, but in the southern, ethnic Albanian part of Kosovska Mitrovica.

Marko Djuric was arrested yesterday in northern Kosovska Mitrovica, where he was attending a gathering dedicated to the internal dialogue on Kosovo. He was then taken to Pristina, before being turned over to Serbian authorities.

The Serbian president afterwards urgently called a meeting of the Council for National Security, which was originally scheduled to take place on Tuesday.

In Kosovska Mitrovica, it was extremely tense after Djuric's arrest, sirens were heard in the city, while citizens were upset by the brutal arrest.