Members of the intervention unit of Kosovo police detained in Kosovska Mitrovica on Monday Marko Djuric. 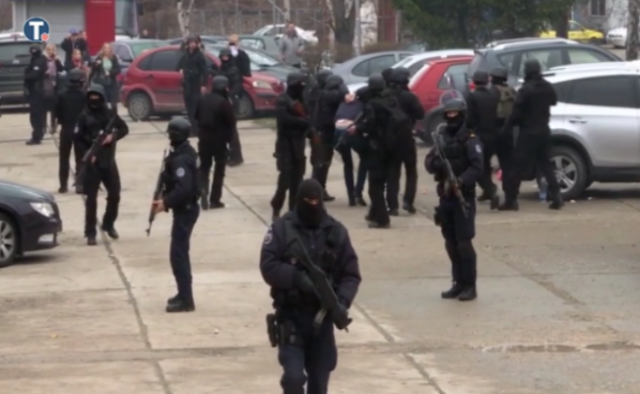 Sirens were sounded in the town, as the incidents unfolded.

According to media reports late on Monday, Djuric, who heads Serbian Government's Office for Kosovo and Metohija, was taken to Pristina. Kosovo-based media have also published photographs of Djuric in custody in an armored vehicle.

Previously, members of the Kosovo police, armed with rifles, threw stun grenades in front of the Mitrovica Palace in an attempt to disperse the Serbs who would not let them enter the premises. Video footage from this then shows special police taking one person out, and pushing them into a vehicle.

Media reports are saying that a number of Serbs have been injured, while RTS said one of their cameramen has been hurt as well.

Beta agency is reporting that shots were heard fired when the police stormed the Mitrovica Palace, along with breaking glass and shouts in Albanian. Tear gas was also thrown into the building's room where political representatives of Serbs in Kosovo and MEtohija had gathered.

Tanjug's reporter from the scene said that Djuric's associate Zeljko Jovic was also detained. According to some unconfirmed information, Serbian president's general secretary Nikola Selakovic has also been detained, but his whereabouts are at this time unkknown.

In Belgrade, President Vucic convened an urgent meeting of the Council for National Security for 19:30 hours on Monday. According to media reports, shortly after the news of Djuric's arrest reached him, Vucic spoke with Russian President Vladimir Putin on the phone. However, Vucic neither confirmed nor denied this.

According to reports, he also spoke, on the phone, with EU's Federica Mogherini, who later confirmed it on Twitter.

Selakovic and Djuric arrived in northern Kosovska Mitrovica around 17:00 hours CET to participate in a round table discussion dedicated to the internal dialogue on Kosovo.

Last Friday, Pristina announced that Djuric was "banned from entering Kosovo" - while other members of his delegation were free to travel there.

However, Djuric told Tanjug that he would be in Kosovska Mitrovica on Monday: "Albanians cannot prevent me from addressing my people."

According to Besim Hoti, who spoke earlier on Monday, an intervention police unit from the same region had been sent to carry out "the operative plan" to ban the planned arrival of several Serbian officials to the territory of the self-proclaimed state.

The deputy commander of Kosovo police in the north has denied that a special unit, "Rosu," had been deployed to this area, KoSSev website is reporting Monday.

Hoti added that he had information this would be a three-member delegation that would include the director of the Office for Kosovo and Metohija, Marko Djuric.

But later in the day, KoSSev claimed that Rosu members had been deployed at Jarinje, while Pristina-based Koha said 200 of them were in northern part of Kosovska Mitrovica.

And while Hoti did not specify who the other two officials are, media in Belgrade said they were Serbian president's general secretary Nikola Selakovic, and Culture Miniter Vladan Vukosavljevic, while media in Pristina think they are defense and interior ministers Aleksandar Vulin and Nebojsa Stefanovic.

Tanjug reported that it learned Pristina authorities had banned Vulin from entering. The minister was on his way to visit the Vucetic family in Kosovska Mitrovica, whose two children were injured when an explosive device was thrown at their home in 2013.

Vehicle checks and Kosovo Police presence were stepped up at the Jarinje administrative crossing on Monday, the agency said, adding that Pristina had announced it would not allow Marko Djuric and Nikola Selakovic, to enter Kosovo and Metohija.

At around 11:00 hours CET, Kosovo police prevented Vukosavljevic from entering Kosovo via the administrative crossing of Jarinje. The culture minister was to visit Serbian medieval Orthodox Monasteries in Kosovo and Metohija this Monday, and on Tuesday.

Kosovo police claimed in a statement later in the day that Vukosavljevi had the permission to enter Kosovo, "but decided not to and turned back" from the administrative line crossing.