Vucic "dissatisfied with results" of NYC meetings on Kosovo

President Aleksandar Vucic told RTS late on Wednesday that he had "a number of difficult and strenuous meetings" on Kosovo in the US over the past three days. 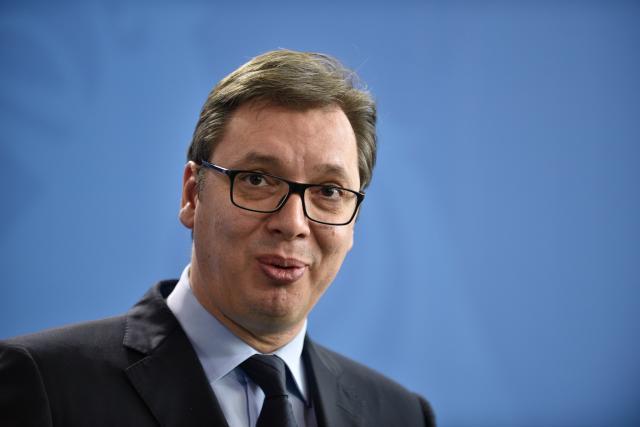 "We are not only negotiating with the Albanians, but also with those who have created an independent Kosovo," Vucic said, adding that he "cannot talk too much about the meetings."

He said he had "a series of marathon-length meetings" and in the end met with UN chief Antonio Guterres.

"I am satisfied with our work and effort, but not with the results. I was hoping for more understanding, I'm not satisfied with what I achieved. For a long time we have been talking about the future of Serbia, about Kosovo... We are trying to find a compromise solution, but the Albanian side is doing its job, and the international community its won. I am not pleased, because the Western powers are firmly committed to respect the preservation of the Kosovo's independence," Vucic said.

Vucic added that he "told Guterres that Serbia was ready to compromise, but not to sacrifice all of its interests."

"In order to prepare a platform for our citizens, I need to get the support of the international community for something. However, the West does not want in any way to talk about who Kosovo belongs to," Vucic said.

According to him, Serbia is today "paying the price of wrong decisions from the past - and there will be a lot of pressure on Serbia."

"Nothing is for free in any place, we will be paying for a long time. There will be great pressures, from different sides," he said.

Vucic added that he was not "particularly happy" because he had hoped for greater understanding not only for Serbia and for the Serbs in Kosovo and Metohija.

"I will do my best as the president to protect our interests. I have to go before the people, to offer something to our people," he said.

Vucic also said last tonight that Serbia is always ready for talks and a compromise to solve the Kosovo problem, but that it is not ready for humiliation.

According to him, this is what he said during his conversation with Guterres, but also in the many meetings with officials whose countries have recognized the independence of Kosovo.

"As long as I am the Serbian president they will not humiliate Serbia, while we are always ready for a compromise and a conversation," he said.

Vucic told RTS that he would "fight for Serbia in New York, Brussels, London, Berlin, Paris," but also in those places where the unilaterally declared independence of Kosovo is opposed - such as Moscow and Beijing.

"I say it every time (to Western interlocutors), you are not the whole world, there is another half of the world that does not recognize that. You mean to say Serbia has quite nothing in its hands - it does, but Serbia wants a compromise, and you consider whether you want to a compromise, or a humiliation of Serbia," he said.

The president added that he wished the talks on Kosovo and Metohija were conducted only between the Serbs and the Albanians, "without the interest of other powers - because problems would be easier to solve that way."

And he will inform the public about the contents of this, "and all his other conversations held in New York," said a brief statement issued by his cabinet.

As stated, Vucic will address the Serbian public "soon" - but it was unclear today in what way.

The statement added that Vucic and Guterres "spoke about the situation in the region and the current state of the dialogue between Beorgad and Pristina."

RTS is reporting that during the meeting, the Serbian president advocated respecting UN Resolution 1244 on Kosovo, the role of UN's mission, UNMIK, in the province, and finding a compromise solution for Kosovo.

According to RTS, Vucic said during the conversation that Serbia is "ready to cooperate both with international organizations and with Kosovo Albanians, and stressed the importance of finding a compromise."

"He emphasized, however, that compromise does not mean that one party gets everything and the other loses everything, but that both sides give and invest something. Guterres, for his part, supported the continuation of the dialogue between Belgrade and Pristina, and at the same time assessed that the return of displaced persons (to Kosovo) was inadequate, and that this should be solved. He stressed that all issues should be resolved in a peaceful manner," the public broadcaster said in its report.

Vucic's trip to New York City this week went amid speculation about its nature. After Voice of America reported that it learned unofficially the visit was "private," it was announced that Vucic would meet with Guterres at the UN HQ.

According to Tanjug and Blic, the visit comes as part of "the diplomatic offensive of the Serbian president at all levels."

After New York, Vucic is heading to Brussels where he will meet with Hashim Thaci and continue the dialogue between Belgrade and Pristina under the auspices of the EU.