Prime Minister Ana Brnabic and ministers of the Serbian government laid a wreath today to the memorial plaque to the former Prime Minister Zoran Djindjic. 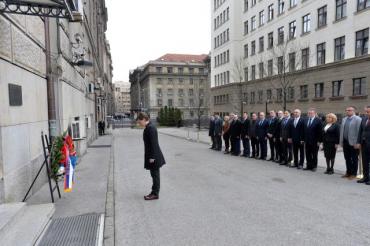 The memorial is located in the courtyard of the government building, and the ceremony took place on the occasion of the 15th anniversary of his murder, the government announced.

Djindjic was assassinated on March 12, 2003 in the courtyard of the Serbian government.

Members of Djindjic's family and of the Democratic Party, as well as citizens visited his grave today, placing flowers and wreaths.

The LPD party, meanwhile, organized a protest walk to mark the day.