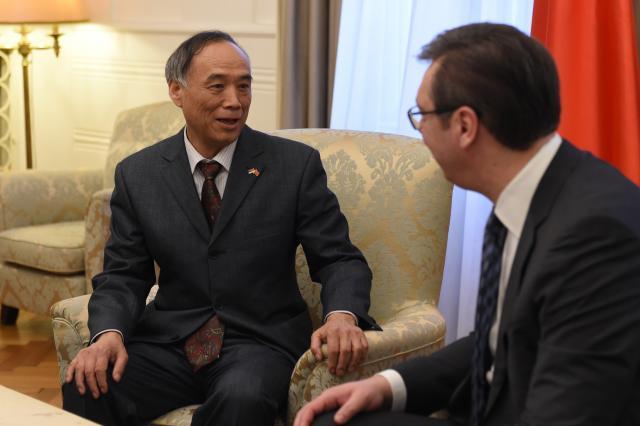 Vucic told the Chinese ambassador that the news of the wish of President Xi Jinping to once again meet with the Serbian president was very significant for Serbia,and expressed his gratitude to China and its leadership for the support they provide to Serbia and its citizens.

Vucic pointed out that the friendship between the Serbian and Chinese people was made of steel, the kind that nobody would break down, which, he said, the Chinese president himself said on several occasions.

"This friendship has been demonstrated, proven and confirmed in the most difficult moments through Serbian history, and we are very grateful to the people of China, its leadership, headed by President SXi Jinping, for the support it provides to Serbia, our people and citizens," the Serbian president said.

As he added, he would talk with the Chinese Ambassador today about numerous projects between China and Serbia, primarily infrastructural. In that sense, he underlined that the citizens of Arilje, Ivanjica, Sjenica, Novi Pazar and others will be particularly pleased, as they will discuss the continuation of cooperation in the construction of the highway towards Boljari, towards the border with Montenegro.

"We will also talk about many other projects, and I know that none of this would happen had there not been for the direct support from President Xi and, I would say, perhaps exaggeratedly, not only his good relationship, but his love toward Serbia," Vucic said. That is why, he underlined, the news of his wish to meet again with the Serbian president was very significant for Serbia.

Vucic underlined that Serbia's attitude towards China is such that it can be felt and seen at every step, because the citizens of Serbia extremely appreciate, respect and love both China and the Chinese people. "When it comes to the relationship with President Xi, we wish him good health, we wish him long and successful leadership, as he has done so far, in the interest of the Chinese people. But not only in the interest of the Chinese people, but also for all peoples who want to preserve their independence and want to promote economic, trade and all other relations," the president said.

Vucic once again expressed his gratitude to China, because the friendship of that country, as well as of President Xi, means a lot to both Serbia and the Serbian people. "We will do our best to make this friendship, even though we are the smaller country and only numerically a small nation, demonstrated and confirmed in times when many others are not on your side," the president said, adding that in the coming days, a special a letter will be sent to the president of China, that will be deliver the ambassador, with a request for the letter to be delivered to President Xi.

The Chinese ambassador said that immediately after the meeting with the Serbian president, he would send his speech to President Xi, which, as he said, would surely make him rejoice.

Li also said that the Chinese foreign minister held a press conference recently, and in his speech in response to questions about the initiative Belt and Road, said that Serbia is not only participating, but also supports it. "Zelezara is one great partnership between Serbia and China, and he said it publicly before everyone," Li said.

Aleksandar Vucic received yesterday a letter from Xi Jinping, in which the Chinese leader confirmed that he had accepted the invitation to visit Serbia again.