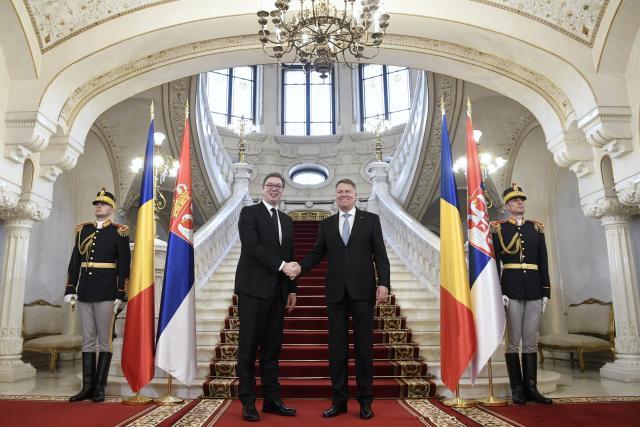 Vucic said that he asked the Romanian president to help Serbia in its efforts to find a compromise solution on the issue of Kosovo and Metohija.

At a joint press conference, Vucic said that he informed his Romanian colleague - who he said has an immeasurable reputation in Europe, the US and the world - about the talks on the issue he recently had with German Chancellor Angela Merkel, with EU officials, as well as about "everything which is important for finding a compromise."

The Serbian president said that Romania is the largest country in the region, and having in mind it is also one of the five EU member-states that did not recognize the self-proclaimed independence of Kosovo, added that hhis plea came precisely in order to have assistance "from this neutral and different point of view."

Vucic underlined that Iohannis has a great reputation in the world and that he pleaded both for his personal, and for Romania's support to Serbia's efforts to find a compromise solution.

Vucic reiterated that Serbia's position is that "it cannot happen that one side gets everything and the other loses everything - instead both should be somewhat dissatisfied, which would be a fair and only just solution."