Patriarch Irinej says he supports the idea to add "Patriarchate of Pec" to the official name of the Serbian Orthodox Church (SPC). 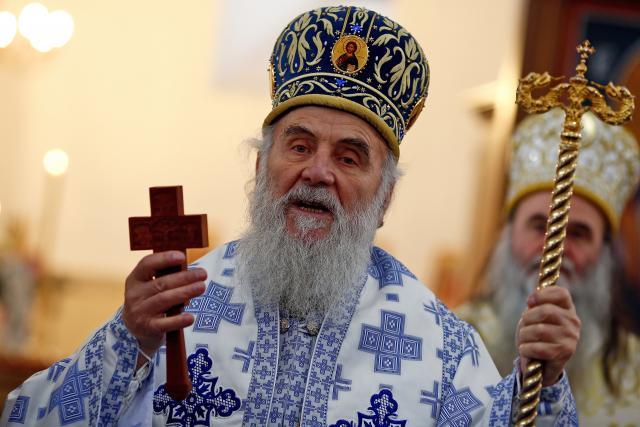 However, he said he would not move to Kosovo, i.e., to the town of Pec.

The media reported at the beginning of the week that the Serbian Orthodox Church is preparing major changes in May to the way its leader is elected, and to its internal organization and name.

Religious analysts have no dilemma that adding "Patriarchate of Pec" is the aspiration of the Serbian Church to return to its ancient ties with Kosovo.

"If the Patriarchate of Pec appears in the name so firmly, then the patriarch should be in Pec, too, and that will hardly happen," religious analyst Miroslav Kavezdi told the broadcaster O2.

"The patriarch cannot move to Pec, Belgrade is still an administrative center," Irinej told the daily Kurir, and added:

"Pec remains as the history of our past, where patriarchs, archbishops sat, and regardless of what happened, Pec remains the historic center of our Church. Everything that contributes to preservation of history, to the attachment of our Church to Pec and Kosovo, we accept."

He described the proposal as "very good" and said he hoped it would be adopted. But he is not in favor of changing the current manner of choosing the patriarch, the so-called "apostolic draw."

"I would personally like it to remain the way it is, this is my opinion, but we will see how the (SPC) Assembly will decide. These are all suggestions, we will see what will be adopted," said the patriarch.

The SPC announced on Thursday afternoon that Patriarch Irinej's statement, as published by Kurir, "does not correspond to the content of the conversation."

According to the statement, the tabloid took out of the overall context the construction that it used on the front page (about the patriarch not wanting to move to Kosovo)

The SPC said that during the interview, Irinej "spoke exclusively about the significance of the Patriarchy of Pec as the ancient seat of the SPC, and about Belgrade as its administrative seat."

Commenting on the possibility of future heads of the Serbian Church having their seat in Pec, the patriarch "never mentioned himself, nor was this at all discussed," the statement said.