Prime Minister Ana Brnabic says the interest of the citizens of our country must be in the first place in the process of amending the Constitution of Serbia. 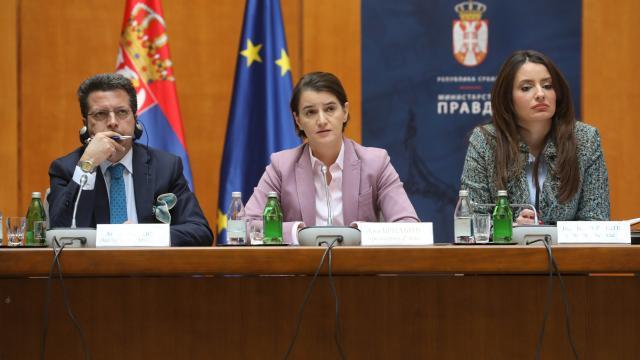 This is true along with "seeking a balance between the independence and the responsibility of the judiciary," Brnabic said on Monday, "adding that the ineffective judiciary is hampering reforms," the government announced.

Speaking at the fourth roundtable, as part of the second round of the public debate on constitutional amendments proposed by the Ministry of Justice, Brnabic recalled that the process of amending the Constitution in the field of justice started nine months ago, and that this was for the sake of citizens of Serbia, but also because of the reforms which are in progress.

She explained that the success of reforms is brought into question if we do not have a judiciary that is efficient and gives security and stability to the citizens of Serbia, but also to the economy, investors, entrepreneurs, small and medium-sized enterprises.

An independent judiciary is the civilization norm that the Government wants to respect, she said and added that Serbia needs a judiciary that is efficient - much more efficient than today, and which is responsible - much more responsible than it is today.

Therefore, when looking for a balance between independence and responsibility, we should always return to what should be in the first place for everyone and that is the interest of the citizens of Serbia, the Prime Minister underlined.

She recalled that at the time of the passing of the last, current Constitution in 2006, there were no public debates, nor was the proposal of the text of the Constitution sent to the Venice Commission for an opinion.

The very fact of how this process looks today speaks about the progress of Serbia and how much it is different today than it was in 2006, Brnabic stated.

The Prime Minister underlined that the Constitution is not being changed because of the European Union, Chapter 23, or because it is one of the most important things for opening new chapters. This is necessary to continue the reforms that we have started and for them to be sustainable, the Prime Minister concluded.