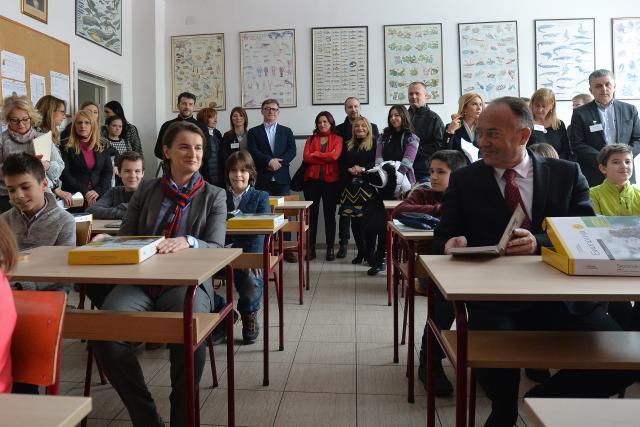 Brnabic, left, and Sarcevic, right, in the classroom (Tanjug)

Speaking at the Drinka Pavlovic Elementary School in Belgrade, she said that the Serbian government has allocated EUR 70 million for introduction of digital textbooks.

At the promotion of digital teaching material at the biology lesson in the fifth grade, Brnabic pointed out that the Serbian government started bravely and rapidly with reforms in the education system, which is the most important task, the government said on its website.

"If we continue this way, then we have secured a different future for our children and the country. Information technology, software development and coding were introduced last year as compulsory subjects as of fifth grade," the prime minister said, adding:

"We have connected primary schools to the academic network of Serbia, and we have to connect all of them on a high speed internet, which is necessary for introducing digital textbooks into two thousand classrooms within the pilot project."

"We are most likely to work with the European Investment Bank, and there is a possibility to get significant support from the European Commission," Brnabic said, and "expressed her satisfaction with the introduction of the electronic class register, which has already given results, as students are less absent from classes, and employees in schools spend three quarters of less time for administrative work."

The plan, as she recalled, was to introduce an electronic class reisters to 200 schools, but now it exists in 556 educational institutions.

Minister of Education, Science and Technological Development Mladen Sarcevic announced that a law on textbooks, which will prescribe the standard of digital textbooks, will enter the parliamentary procedure at the end of March.