Vucic to unveil Kosovo proposal "in early April at latest" 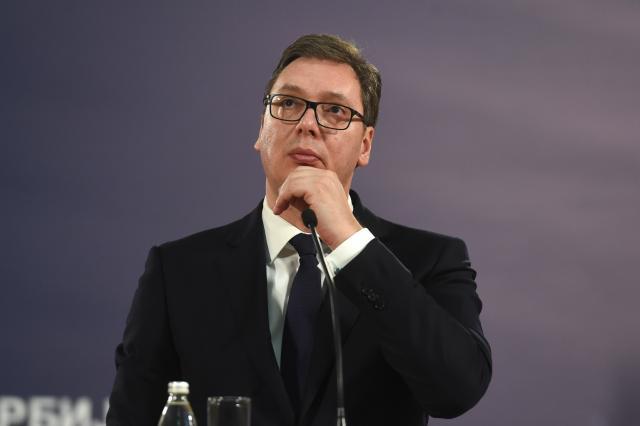 Vucic told a talk show on Happy TV late on Monday that he and Gabriel have different opinions - but that their recent conversation in Belgrade was frank, and that he at one point told the German official, "And what am I supposed to be telling the Serbs now, Sigmar."

"He says to me, 'there is no more conversation and everything is over concerning the territory of Kosovo' - that Kosovo is independent. I say, alright. But you could you talk about Kosovo ten years ago, and now you can't? 'I understand what you are asking and how it is in Serbian shoes', he tells me," Vucic said.

He added that Gabriel is in favor an independent Kosovo, and did not hide it.

In addition, Vucic told how he in the past repeatedly tore papers coming from Western officials concerning "an independent Kosovo."

"And whenever I got such a piece of paper, and usually it is with the text - 'don't be mad, but here's what we suggest' - I've torn every one of those papers... Do you know how many I've torn up," Vucic asked, and then demonstrated how he does this - by tearing a paper in the studio.

The president then announced that he will speak about his proposal for "a Kosovo solution" at the end of March, or early April at the latest.

"I'll come out with it because I am not a coward, I will have the courage to say what the proposal is, but it will not be, 'dear Albanians, we're handing everything over to you' - it will be a compromise. If they don't want to talk about it, we will have a frozen conflict," said Vucic.

He added that the Albanians "reject any compromise solution and want Greater Albania."

"Serbia does not want Greater Serbia, but to preserve the identity of Serbs. We need Serbs to be safe, to be able to preserve their last names," Vucic said, adding that he "hopes the world will understand that Serbs cannot lose everything, while Albanians gain everything."

Vucic's reference to Gabriel concerned his visits to Belgrade and Pristina on the same day last week and, where he more or less carefully chose his words to speak about Germany's expectations regarding the issue of Kosovo.

He at the time told a press conference with Vucic that "Germany, like the EU, wants to resolve the situation between Belgrade and Pristina, Serbia and Kosovo."

A few hours later, Gabriel visited Pristina as a representative of the country that recognizes Kosovo and was much more specific in terms of Belgrade-Pristina relations.

“If Serbia wants to move toward the European Union, the building of the rule of law is a primary condition, but naturally also the acceptance of Kosovo’s independence,” Gabriel said during a joint press conference with Kosovo Prime Minister Ramush Haradinaj, Reuters reported.

After that, strong reactions started coming from Serbian officials, with Foreign Minister Ivica Dacic referring to Gabriel being a member of Germany's outgoing government when he bid him farewell.