"Serbs love those who love them" - FM meets with Austrian VC

Austrian Vice-Chancellor Heinz-Christian Strache says the problem of Kosovo has not been solved in the long term. 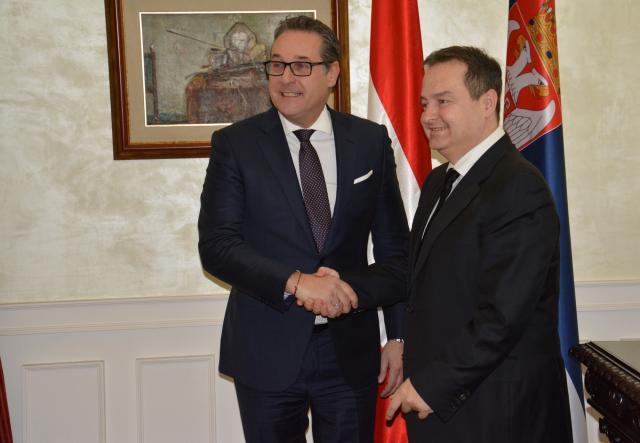 Strache and Dacic are seen in Belgrade on Monday (Tanjug)

And - Belgrade and Pristina need to arrive at a compromise solution, he said in Belgrade on Monday.

Strache told reporters that it was "a reality that Austria has recognized Kosovo - but it is also a reality that Serbia sees Kosovo within its composition."

"That's a reality to Serbia, therefore this problem has not been solved in the long-term. It is necessary for both sides to meet each other halfway, and find a compromise," Strache said, recalling that out of 193 UN member-states - "105 have recognized Kosovo."

Kosovo is Serbia's southern province where ethnic Albanians unilaterally declared independence ten years ago - a declaration that Serbia continues to consider a violation of its territorial integrity and sovereignty.

Speaking in Belgrade on Monday, Strache said that he, as Austria's vice-chancellor, was "not interfering on the issue" - but added that he had "understanding for the Serb side, and the Serb view of the problem" - and that a long term solution to the issue "cannot be unilateral."

"I hope a sustainable solution will be found," he told reporters.

Strache also recalled that in the past - before he joined Austria's government - he criticized his country's decision to recognize Kosovo - while Ivica Dacic spoke to say he was grateful to Strache "for not backing down from this position, even today."

"Austria stands by its decision about Kosovo's independence, but I have understanding for the position of the Serbs. Serbia is not a problem - Serbia is a part of the solution," Strache said.

"I am grateful to him for adhering to that position," Dacic said, adding that Strache "could have said that he was not a part of the government at the time - and was now no longer allowed to say it."

We must not require Strache to be more Serb than we are, Dacic remarked on Monday in Belgrade.

"Well done, Strache," the minister said, and - using the (familiar) second person singular pronoun in Serbian to address him - continued: "The Serb nation owes a great deal to you, and is thankful for that. We have the right to choose whom to love - those who love us."

The Serbian foreign minister added that "relations with Strache" had been "friendly" even before he rose to the post of Austria's vice-chancellor - and that Serbia hoped to achieve "best possible cooperation with the new Austrian government."

Dacic thanked Austria for the support the country offers to Serbia on the road of EU integration - and added that he expected this support to continue - "and in line with EU's (enlargement) strategy, for us (Serbia) to become a full-fledged EU member by 2025."

"When it comes to KiM (Kosovo and Metohija) we are aware that Austria recognized (its) independence. We expect them to show understanding for our position that the decision to declare (Kosovo's independence) did not close the issue - that dialogue must be held, and a compromise solution sought. In that sense we expect the dialogue to be spurred - rather than the position of 'everything has been solved' to be affirmed," Dacic said.

The time has come to comprehend the reality, he continued - and that is that there can be no solution without engaging in dialogue, and reaching agreements.

Strache told reporters that he cared about "the friendship with Serbia reviving, and deepening" - and added that he and Dacic spoke about economic cooperation, EU integration - and about "the Serbs living in Austria."

"Austrian companies have invested EUR 2.3 bullion (in Serbia) and (created) 20,000 new jobs. That will intensify. In Austria, we have over 260,000 people of Serb origin, and they are an important element of our society. We wish to support Serbia to the full extent, when it comes to European integration," Strache said, according to Tanjug.

The high-ranking Austrian official added that his country "had a responsibility" to support Serbia when it comes to the migrant crisis - and that Vienna must not leave the country "in the lurch."