Ana Brnabic said on Thursday, after the joint session of the two governments, that Serbia and Slovenia have excellent political and economic relations. 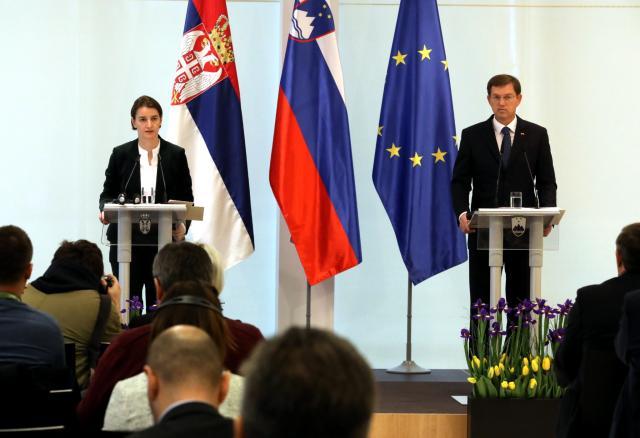 According to the government, the prime minister also said these relations are "characterized by great friendship."

According to the government, the prime minister also said these relations are "characterized by great friendship."

Brnabic said at a joint press conference with Prime Minister of Slovenia Miro Cerar held after the session of the two governments, that the friendship with Slovenia in the process of Eurointegration of our country is important for us, as well as the friendship of the two peoples, the Prime Minister pointed out, adding that she has very good communication with her Slovenian counterpart Miro Cerar.

She expressed special gratitude to Slovenia for the support it provides to Serbia on the European path, both when deciding on the opening and closing of the chapters, as well as in providing technical support in their preparation, which our country values very much.

Brnabic stressed that Serbia is strategically committed to EU membership and recalled that 12 out of the 35 chapters have been opened so far, and that it is expected that five more chapters will be ready for opening in June and that then we will have the support of Slovenia to open them.

The prime minister pointed out that the reforms that Serbia is taking on this path are primarily important for improving the quality of life of citizens.

Cerar stressed that Serbia and Slovenia are two friendly countries that develop their relations through joint government sessions to the benefit of the economy and citizens, while Slovenia will continue to intensively and firmly support the European perspective of Serbia.

Slovenia does this now in two ways – through support in European institutions, but also through technical assistance. Since September 2015, we offer Serbia complete assistance in areas that are related to the areas of EU negotiation, the Prime Minister of Slovenia said.

He said that he expects that Serbia will continue with the reform process, and assessed that in recent years these processes have shown favorable financial and economic indicators, with good results.

I congratulate the government and everyone else in Serbia and we want that development to continue to be successful, Cerar said.

He said that Serbia is one of the most important foreign trade partners of Slovenia and an important destination for Slovenian investments.

There are more than 1,500 companies operating in Serbia that are totally or partially owned by Slovenians and employ 25,000 workers.

According to the Slovenian Prime Minister, Serbia is the second most important investment destination for Slovenia and Slovenians in Serbia have invested over €1 billion, but Serbian investments in Slovenia are also strengthening.

We once again proved this by signing important agreements between the two countries with a very constructive discussion at the government session, where the emphasis was on economic cooperation, Cerar said.

In addition, there are also possibilities for strengthening economic relations in the field of environmental protection, infrastructure, energy, digitization and industrial electro-metallurgy, Cerar concluded.