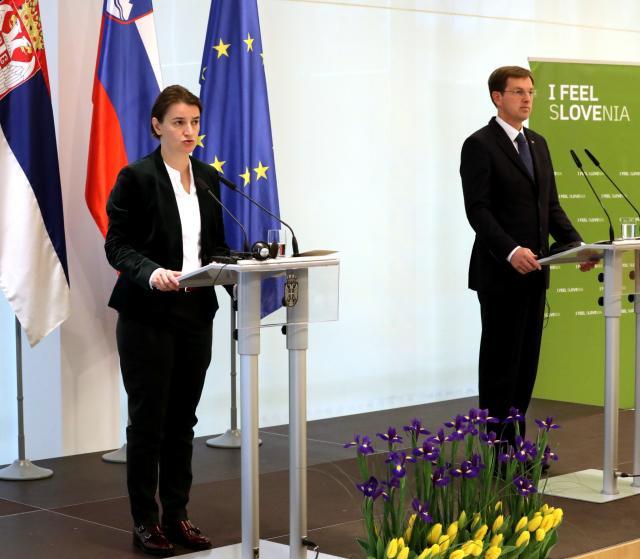 The Serbian prime minister spoke on Thursday in Slovenia, where her cabinet and that of Slovenian PM Miro Cerar held a joint session - and referred to the visit to Belgrade on Wednesday by European Parliament President Antonio Tajani.

"I think has been said unequivocally by EP President Tajani, that Serbia will not have to recognize Kosovo's independence in order to join the EU. It seems to me that this is a clear and unequivocal message," Brnabic said.

"Normalization with Pristina and finding a long-term sustainable relationship with Pristina is our obligation as the politicians who lead Serbia," she added.

The prime minister underlined that she was glad to be at the helm of the Serbian government, and to be living in a country whose president is "a brave enough and a responsible enough politician to want to raise this issue and try to solve it, so as not to leave it to future generations."

According to her, "the easiest thing to do would be to say that this is a frozen conflict, and hand the hot potato over to someone else."

Brnabic added that Serbian officials today discussed this issue with their colleagues from Slovenia - "who have a different stance on Kosovo and Metohija."

"Slovenia recognized that independence," she said. "But it is important that Serbia really showed a different side to itself - that it can be patient, that it can think with a cool head, that we can be tolerant and flexible and respect deals and agreements."

According to Tanjug's report from Slovenia today, Brnabic also "underlined that the Brussels agreement (between Belgrade and Pristina) was signed almost five years ago - and Belgrade has fulfilled most of its part, while Prishtina did nothing" - referring the Community of Serb Municipalities (ZSO).

Brnabic said that she told Cerar that "a special responsibility" lies on the countries that have recognized Kosovo to now urge Pristina "to act serious enough and respect these agreements."

According to her, Belgrade has demonstrated that it is ready for dialogue - the president of Serbia has shown that he is "always open to dialogue" - therefore the prime minister said she was "glad that the dialogue has been raised to the presidential level."

Brnabic added that "the murder of Oliver Ivanovic additionally complicated the situation" and that she believes it was "a bad decision (of Pristina)" not to allow Serbia to take part in the investigation of the murder - but also stressed that this at the same time shifted the responsibility to Pristina, "but also, in part, to the EU and EULEX (EU rule of law mission in Kosovo)" to find the killers.