Serbia has a stable economy and public finances, and that the share of public debt in GDP is below 60 percent. 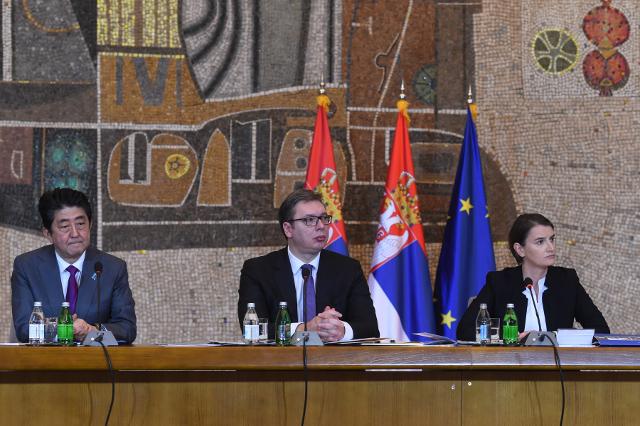 Prime Minister Ana Brnabic said this on Monday during a meeting of Serbian and Japanese business delegations, held in Belgrade.

Brnabic highlighted the importance of the visit of Prime Minister Shinzo Abe to Belgrade, assessing that the bilateral and political relations of the two countries are on the rise.

The citizens of Serbia very much respect the support and help of Japan, especially during the catastrophic floods in 2014, she said, adding that the goal of the Serbian government is that this meeting brings the increase of trade and investments from Japan.

Owing to a responsible economic policy, Serbia today is a country with a surplus in the budget where the net inflow of foreign direct investment is just over EUR 2 billion, and it also successfully concluded the arrangement with the IMF and showed that it is a good partner in the most difficult circumstances.

Our country is getting more and more competitive year in year out, now we are on the 43rd place on the World Bank's Doing Business List. Out of 190 countries of the world, we are the tenth by the speed of issuing construction permits, and we have advanced 12 places on the competitiveness list of the World Economic Forum, Brnabic said.

According to her, the World Bank has declared Serbia the leader in South East Europe for the reforms implemented, the credit rating has increased, and we are also on a safe path to the EU, with 12 out of 35 chapters opened.

Serbia is thinking strategically about its development, innovations are now a new challenge and there we want to learn from Japan because the economy of the 21st century is based on digitization, creativity and development of all those skills that Japan is successfully developing, the Prime Minister underlined.

She added that Serbia wants to learn from Japan about business ethics and effective management, in which Japanese companies are forerunners.