Serbia has been promoting its national interests through a wise and balanced policy, Foreign Minister and First Deputy PM Ivica Dacic said on Friday. 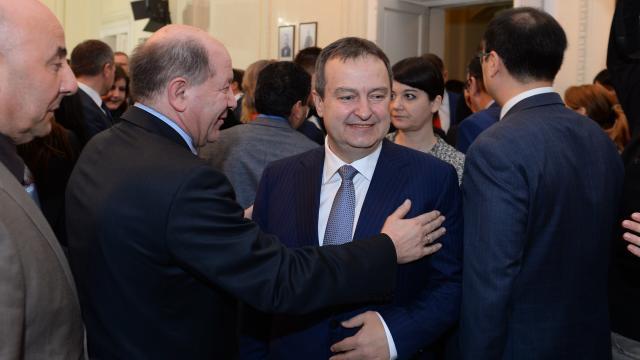 This is true above all when it comes to the protection of its territorial integrity and sovereignty, he added.

At the same time, Serbia continued activities aimed at achieving its key foreign policy priority and that is full EU integration, he told diplomats and editors of media outlets gathered at the Ministry of Foreign Affair's New Year reception.

Dacic also said he expected Serbia to open more EU membership negotiations chapters this year, an remarked that European Commission President Jean-Claude Juncker "singled out Serbia and Montenegro as front-runners in European integration and announced a strategy for their successful EU accession by 2025."

The minister pointed out that this was the first time that "a time frame" for Serbia's membership in the EU has been defined, which he said was "a very good message."

Dacic stressed he was satisfied with the results achieved in foreign policy during 2017 and said he hoped that during the Bulgarian EU presidency, the number of open chapters would be "significantly higher" - with the EU in this way recognizing Serbia's efforts and give value to the progress made on the European path.

The minister recalled that Serbia opened six negotiating chapters last year, i.e., that 12 chapters have been opened since the beginning of the negotiation process, with two chapters temporarily closed.

Dacic stressed that Belgrade is fully committed to the dialogue with Pristina under the auspices of the EU, adding that it expects Pristina to respect and fulfill its commitments.

"Efforts have continued to ensure that all available diplomatic means are being used to protect our territorial integrity and sovereignty, as well as to avert attempts to make Kosovo a member in various international organizations," he said.

The foreign minister added that a firm commitment to developing relations with Russia has been supported by regular meetings between high ranking officials and regular and meaningful conversations between the two sides, something that was demonstrated by the recent visit of Serbia's delegation to Moscow headed by President Aleksandar Vucic.