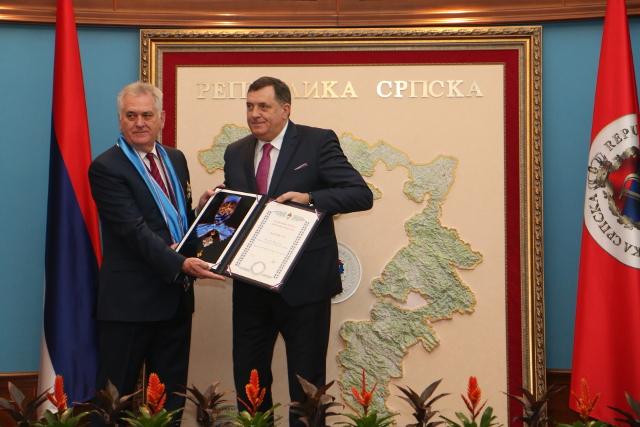 This took place as the Serb entity in Bosnia-Herzegovina (BiH) is celebrating its day.

Nikolic was honored for special merits in developing and strengthening cooperation and political relations between Serbia and the RS, as well as for his outstanding contribution of a broader significance to the affirmation and post-war development of the RS, the N1 BiH broadcaster is reporting.

According to this, Nikolic said during the ceremony: "If the road to our unification is your autonomy and independence, I wish you autonomy and independence, from the heart. There must be no deviation from this road. There will be another one hundred obstacles, but we are merely those people who go ahead of the will of the people, and it is clear - Serbia and the RS will be deciding jointly about a joint destiny."

The former president - who now heads Serbia's National Council for Cooperation with Russia and China - also said that "a part of the international community was taking away the sovereignty, independence and the right of the RS, by putting it under some sort of common state," which he "does not yet see functioning."

"My most difficult challenge for the RS was the (draft British) resolution on Srebrenica in the (UN) Security Council, and I knew that if it came to a vote, we would not stand a great chance," he continued.

"If they vote the way they planned, then the RS will not stand a great chance, either. I then decided to do something that was not diplomatic, but it was desperate - to address our mother Russia and the great President Putin... I wrote a letter to Putin and I stated that 'with this, we are sealing the fate of the RS'. Vladimir Putin vetoed the resolution on Srebrenica, raised our heads, encouraged us... Ever since, I have not really been liked by these little friends of ours - and what kind of a man would I be if people who do not think well to my people loved me."

According to N1, along with Nikolic, Dodik today, among others, honored filmmaker Emir Kusturica and Austrian Vice-Chancellor Hans Christian Strache.

Although the Constitutional Court of Bosnia-Herzegovina found that marking RS Day on January 9 was unconstitutional, a number of events, including religious ones, will be held on Tuesday to celebrate the day.