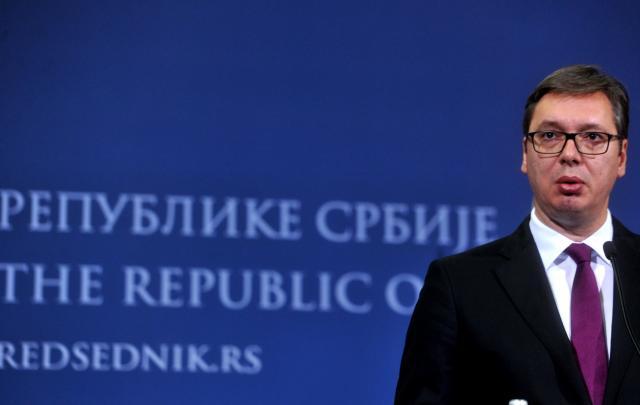 Vucic told TV Pink in an interview that the longest of their conversations happened face-to-face - "(in) a huge room, the two of us alone" - but would not reveal any details other than that they spoke about "the situation in the region, preserving peace and stability, Kosovo and Metohija, military-technical cooperation, the gas pipeline."

Vucic also remarked that during his trip he received an honorary doctorate degree from MGIMO - one of the best diplomatic universities in the world - and that he was the first Serb and the first from the region to be honored in this way.

Vucic said during the interview that "as long as he is president" Serbia would not impose sanctions on Russia.

Asked to comment on statements coming from US officials and Balkan experts urging Serbia to "turn toward the EU", Vucic said:

"All I can say is - the Americans are our friends, they're all our friends. We are leading the government and the state in a way that follows the interests of the Republic of Serbia, not any foreign power, not America, not Russia, not the EU. There will be pressure on all sides and it won't be easy to resist it."

Speaking about the region, Vucic said he thinks that the Dayton peace accord that in 1995 ended the war in Bosnia-Herzegovina is now "threatened" - but that the agreement provided peace, and that "any undermining of it could lead to unforeseeable consequences."

Asked why his visit to Croatia planned for December was canceled, Vucic said he was "always ready" to meet with this Croatian counterpart.

He said the reason for the cancellation could be that he "told the truth, that many more Serbs than Croats went missing (during the war in Croatia)."

"I apologize for telling you the truth," Vucic added.

During the wide-ranging interview, that also touched on the opposition, media, and Sunday's local elections in five municipalities, Vucic announced that the Japanese prime minister would visit Serbia on January 15, adding that the visit will be important when it cones to capital investments, development of high technologies, and digitization.

Next year will be full of challenges, Vucic said, and singled out Kosovo, regional peace and stability, and further strengthening of the economy.