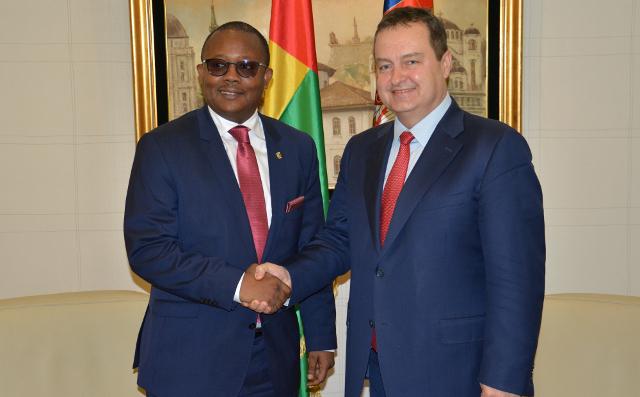 The O2 broadcaster is reporting that Embalo said Guinea Bissau is on the list of countries that have done that, even though it did not recognize Kosovo.

Suriname recently decided to revoke its recognition, while the first country that did this in the past was Sao Tome and Principe.

According to a website that has a list of countries that have recognized the unilaterally declared independence, Guinea Bissau is listed as allegedly doing so on January 14, 2011.

But speaking in Belgrade today, Embalo said he never saw any document that would confirm his country had indeed recognized Kosovo.

"If one of you has some paper, you should show it to me, I have searched everywhere and found nothing," he told a joint news conference with Serbia's Foreign Minister Ivica Dacic.

Dacic remarked that "if previous authorities of Guinea Bissau recognized Kosovo, that doesn't mean the current government is behind it."

Umaro Sissoco Embalo, who has been the prime minister since November 2016, was also received today by Serbian President Aleksandar Vucic, with whom he discussed bilateral relations, improving economic cooperation, and regional issues.

This African country did not support Pristina's failed 2015 bid to join UNESCO.

Several years ago, there were dilemmas about the actions of Sao Tome and Principe when it comes to recognizing Kosovo, and there was also a mention of revocations of recognition by African countries that remained unnamed.

During a summit of the Non-Aligned Movement(NAM) in Belgrade media reported that Oman and Guinea Bissau had revoked their recognitions, but this was later denied.

Vuk Jeremic, at the time Serbia's foreign minister, said that these two countries never recognized Kosovo in the first place, and that he received assurances of this from their officials, adding that "two NAM countries had launched procedures to revoke their recognitions."