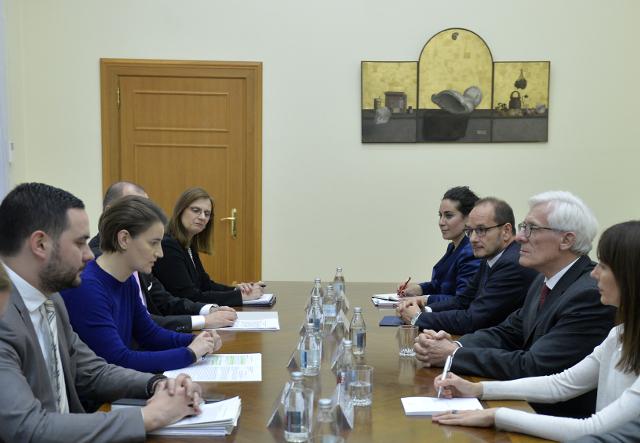 According to the Serbian government, Brnabic "thanked him for his country’s support to regional dialogue and stability of the Western Balkans, which it has shown through its activity within the Berlin Process."

The two officials noted that Italy is the first biggest investor and the second biggest trading partner of Serbia, and that there is room for increasing trade between the two countries.

Brnabic pointed out that the Serbian government has enabled good business conditions, as evidenced by a large number of Italian companies, and invited other Italian investors to do business in Serbia.

Corsini praised the reforms and modernization of Serbia's society, adding that this is a sure way to join the European Union.

The parliament and the government of Italy will provide all the necessary assistance to Serbia on this road, he underlined.

First Deputy Prime Minister and Minister of Foreign Affairs Ivica Dacic also received the delegation of the Foreign Affairs Committee of the Italian Senate, including Corsini, and Senator Vito Petrocelli.

The participants in the meeting expressed satisfaction with excellent bilateral relations between Serbia and Italy, which have the character of a strategic partnership.

Both sides concluded that parliamentary cooperation is at a high level, which significantly contributes to the improvement of overall bilateral relations between the two countries.

Dacic thanked for the support that the Parliament of Italy continuously provides to Serbia on its path to the EU and informed his interlocutors about the current situation in the field of European integration, as well as about the dialogue with Pristina.

He made a special reference to the historical and religious aspects of Kosovo and Metohija, that is, the essential reasons why Serbia will never recognize the unilaterally declared independence of Kosovo.

Members of the delegation from the Foreign Affairs Committee of the Italian Senate expressed their gratitude for the organization of this visit, which is of great importance for them to fully consider the possibilities for improving overall bilateral relations and for the exchange of views on regional and global issues, according to a statement from the Ministry of Foreign Affairs.