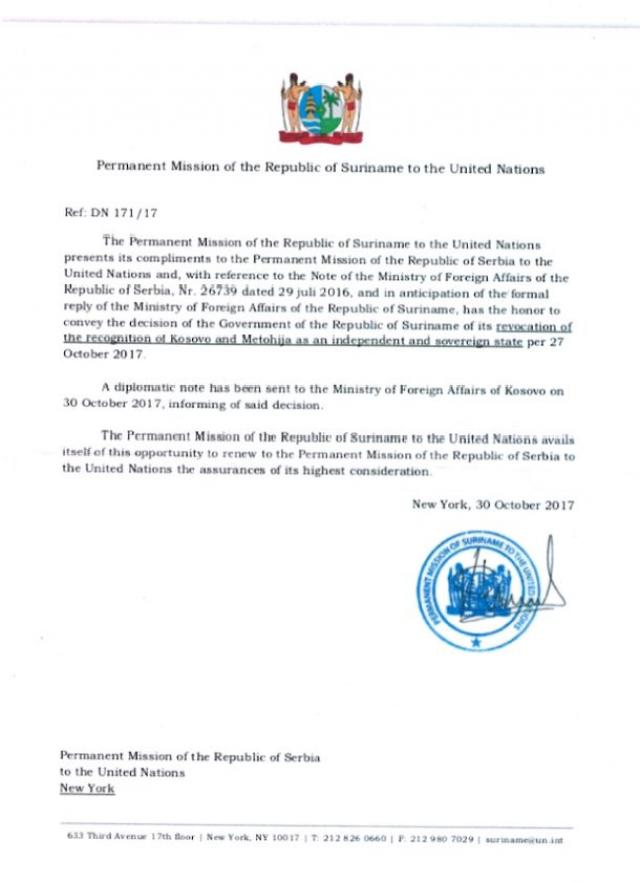 The first deputy prime minister stressed that he received information about this from the South American country's Ministry of Foreign Affairs, and that it came "after long-term work, and many conversations."

He said the note about the withdrawal of the decision to recognize Kosovo arrived in Belgrade on October 30.

"This decision shows that one must persevere, talk with everyone - if we want Kosovo to be our national interest," Dacic said, referring to Serbia's southern province where ethnic Albanians in 2008 unilaterally declared independence - a move Serbia considers a violation of its territorial integrity and sovereignty.

Dacic on Monday went on to say that by August 2012, "more than 80 countries" had recognized Kosovo - while since he took office, "only five countries" did so.

"This shows that it's not over, as some are saying. I'm not sure they'll publish this news in Pristina. This is a very significant event that deserves special attention, not to be spoken about at some other events," Dacic said.

But, he continued, the decision is not a precedent, as this "happened before, but not often."

"In the case of Kosovo, it happened with Sao Tome and Principe, after a change of government. We did not achieve this with money - there's no money; we didn't do it with pressure - we have nothing to pressure with, but we must persevere. I regret that many who were our friends during (Yugoslav president) Josip Broz Tito have recognized Kosovo, but we were dealing more with our enemies," Dacic stressed.

He also observed that what has been created through the violation of (international) law in the case of Kosovo is now "spreading like a virus."

"Our generation will not be the one to see Kosovo get a chair in the UN. That will certainly not happen until Russia and China change their position. We will certainly not support them (Pristina). They have miscalculated. Our man who has contacts in the Suriname authorities helped with this. I call on our entire diaspora to work for their country. We will not stop here. They find fault with me in Brussels and Washington for working on this the most. Well I do, because this is our biggest problem," the minister said.

According to Dacic, the news came "out of the blue" for the authorities in Pristina.

"They didn't expect this. They were announcing that everyone would recognize them, we just had to support them to join the UN. They've miscalculated a little, they don't know that they're dealing with persistent, principled, and slightly stubborn people," Dacic concluded.

The diplomatic note that informed Serbia of Suriname's decision was originally sent to Serbia's Permanent Mission to the UN.

It reads as follows:

A diplomatic note has been sent to the Ministry of Foreign Affairs of Kosovo on 30 October 2017, informing of said decision.

"There's no such thing"

Beta reported later on Tuesday that the Kosovo Ministry of Foreign Affairs denied the veracity of Dacic's announcement.

An adviser to the minister, Jetlir Zumberaj, said the announcement amounted to "slander."

"Revocation of a recognition does not exist as a concept in international law. It's all slander, Dacic is a charlatan," Zumberaj told local media in Pristina.